Australian Dollars were bought Wednesday, leading to gains over most rivals as a weakening U.S. Dollar enabled some commodity prices and many connected currencies to rise, although the Aussie remained the worst performing currency of the last week and was close to being the worst performer for the month too.

“AUD/USD was supported by the weaker USD.  AUD lifted despite the ongoing weakness in Australian retail sales in September and the redemption of $A4.4bn of coupons from Australian government bonds today (half of which accrue to foreign investors). The risks are still skewed to AUD/USD falling towards 0.6850,” says Joseph Capurso, a strategist at Commonwealth Bank of Australia.

It’s no coincidence that underperformance has blighted Australian exchange rates ever since rhetoric from RBA Governor Philip Lowe, Deputy Governor Debelle and colleagues took a further ‘dovish’ turn in September. 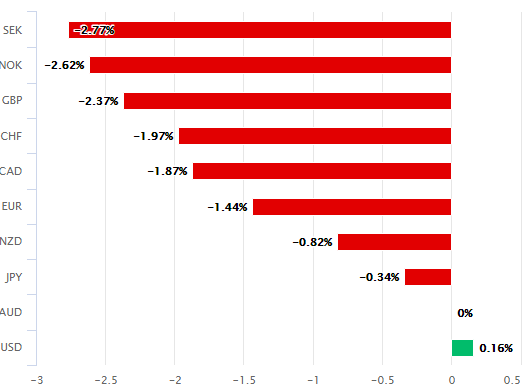 There isn’t an obvious catalyst to explain the change of tone from the RBA, although policymakers have increasingly taken note of earlier strength in Australian exchange rates and worried aloud what second waves of coronavirus infections might mean for the global economic recovery.

But this has been enough to get financial markets fearing further policy action and pricing it into Australian bond, derivative and currency markets.

“Long-term yields have fallen the most recently in Australia undermining support for the Australian dollar,” says Derek Halpenny, head of research, global markets EMEA and international securities at MUFG. “It follows comments from RBA Assistant Governor Christopher Kent who suggested that short rates could fall below zero. The comments were somewhat surprising given RBA Governor Lowe has previously stated that negative rates are “extraordinarily unlikely” but it was prudent not to rule it out. We still assume that the RBA is unlikely to go down the negative rates route.”

The RBA said in early October that it “continues to consider how additional monetary easing could support jobs as the economy opens up further,” prompting the overnight-index-swaps market to shift from implying a November 03 cash rate of 0.087% back on October 02, to 0.058% by Wednesday.

Governor Lowe has since said the RBA might also expand the quantitative easing programme under which it buys Australian government bonds in order to tackle yields that are among the highest in the developed world.

Those bond yields had been a draw for international investors who’ve been ever further starved of yield since the pandemic began, which in turn means they’ve been a significant source of support for the Australian Dollar.

Australian government debt has again offered investors higher returns than U.S. bonds over the last six months, for the first time in years, but that yield advantage and source of support for the Australian Dollar has melted away in October as the RBA’s rhetoric turned more dovish.

“Recent price action has represented a “perfect storm” for AU bond outperformance in that it has occurred during a period of increasing UST yields, driven by fiscal stimulus expectations, at the same time that AU bonds have been buoyed by the prospects of an extended RBA asset purchase programme,” says Damian McColough, head of rates strategy at Westpac. 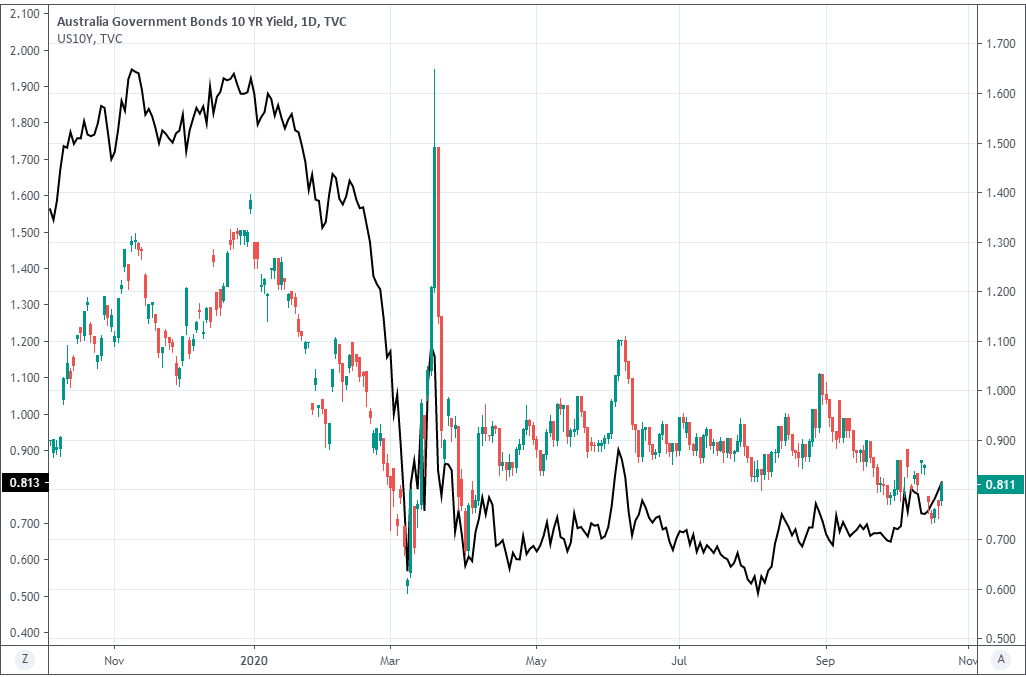 "Given that we expect US 10yr bond yields to push toward 0.9%, the current impulse will likely remain in place at least until the RBA announces its new plans," McColough says.

The difference, or ‘spread’ between Aussie and U.S. government bond yields has turned negative again, likely explaining at least in part the lacklustre performance of the Aussie Dollar in October. Westpac expects this bond market dynamic to persist at least until November 03.

This spread represents the difference in returns earned by investor who buy Aussie government debt instead of that issued by the U.S., although recent spread changes mean American bonds now offer higher returns to investors than their Australian counterparts and so are potentially more attractive.

But with the U.S. set to loosen its purse strings again on the other side of the election - irrespective of which candidate wins - American bond yields could be set to rise further, making it more difficult for their Australian counterparts to catch up even in the unlikely event that the RBA neglects any further action. 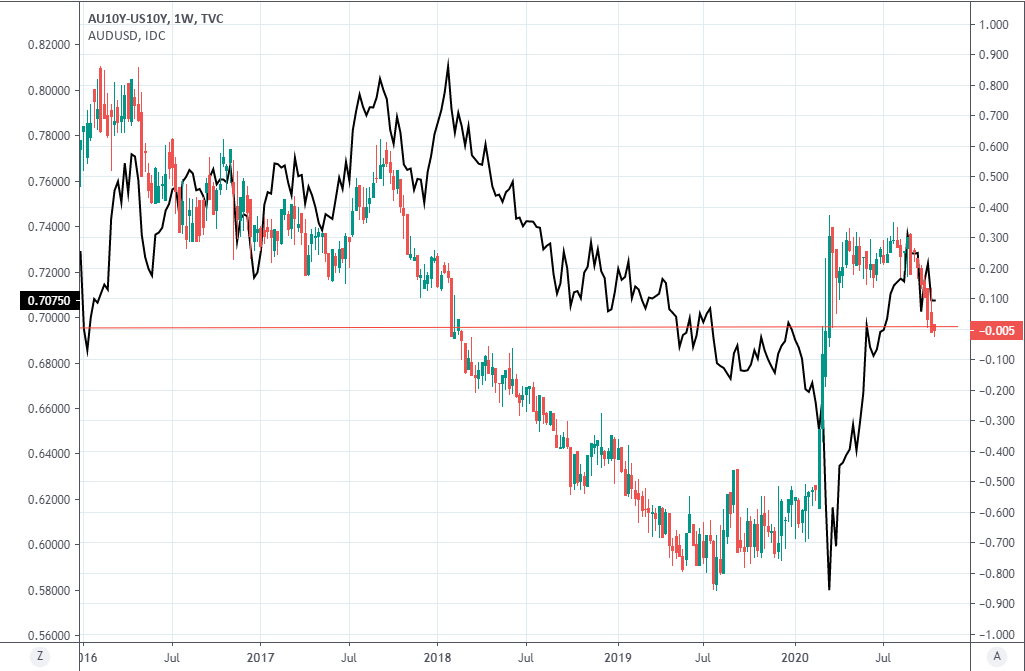 Above: Spread, or gap between AU and U.S. 10-year bond yields with AUD/USD (black line, left axis) at weekly intervals.

This alone could mean the Australian-U.S. yield spread remains negative long after November and no matter what the RBA does or doesn’t do, although on Wednesday financial markets were anticipating the bank will make the Aussie’s headache worse by cutting its cash rate and expanding its QE programme.

The RBA successfully capped the three-year bond yield at 0.25% in response to the pandemic during the second-quarter and expectations now are that it will soon focus on the all-important 10-year yield.

The fundamental backdrop is deteriorating for the Australian Dollar at the same time as the technical picture on the charts also turns awry.

“A negative bias remains entrenched below the short term downtrend at .7198 which continues to cap,” says Karen Jones, head of technical analysis for currencies, commodities and bonds at Commerzbank. “The downtrend maintains a negative bias and the near term risk remains for a slide to .7006, the September low and .6964, the 23.6% Fibonacci retracement. There is scope for this to extend towards the 200 day ma, the February high and mid-June low at .6791/74, which is expected to hold the downside.” 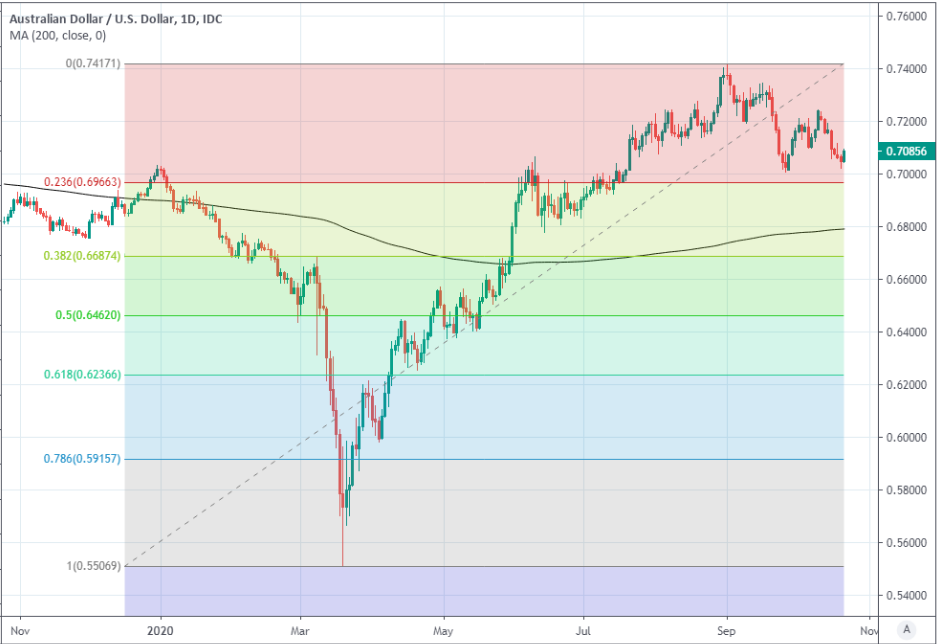 Above: AUD/USD at daily intervals with 200-day moving-average in black and Fibonacci retracements of March recovery.