The Pound-to-Australian Dollar exchange rate will have risen for four days in succession if Monday's climb holds into the close, ensuring the pair is potentially on target to test the June-August highs located in the 1.84-1.8450 region.

The advance comes amidst ongoing expectations for a Reserve Bank of Australia (RBA) interest rate cut in November combined with a belief the EU and UK will strike a post-Brexit trade deal by the end of November.

"Weekend developments & headlines is spurring demand for Sterling this morning. There is a growing perception the red lines maybe closing in & raising the chances of a deal. Sterling likes this," says Neil Jones, Mizuho Bank London's head of FX Sales for financial institutions.

The rally in the Pound confirms a September-October uptrend in GBP/AUD from the lows of 1.7494 reached on September 11. With momentum indicators reading positive on the daily charts attention will be on the looming resistance at the August and June highs located at 1.8412-1.8453 respectively: 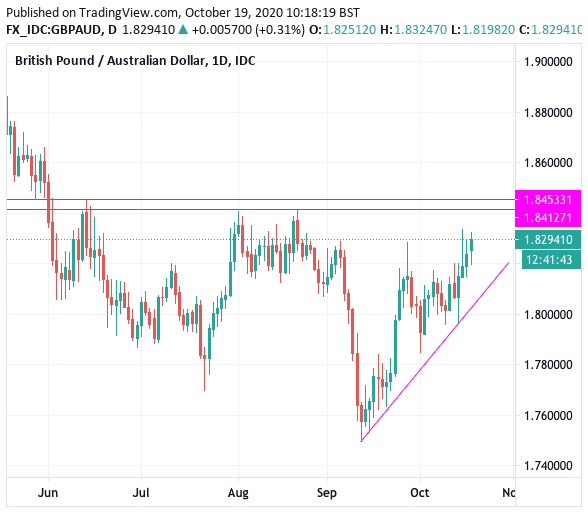 Above: GBP/AUD recovery on the daily chart. If you have an ideal rate in mind we recommend setting an automatic order, learn more here.

The charts are telling us that there is resistance located at 1.8412-1.8453 where upside momentum in Sterling might be challenged.

The gains in Sterling come despite an apparent souring in relations between the EU and UK last week when Prime Minister Boris Johnson said negotiations between the EU and UK had all but ended owing to the EU's unwillingness to compromise. Johnson said the UK should prepare to leave the UK on an Australia-style trading relationship. Given the EU and Australia ultimately trade on WTO terms, such an outcome represents a worst-case outcome for the UK economy and Pound.

However, that Sterling is the best-performing major currency in the G10 at the start of the new week suggests markets are not buying into Johnson's rhetoric and are instead taking the cue from the fact that the EU and UK will this week potentially set out the next steps to negotiations.

The two sides are talking, and given an expectation that deals are only reached at the last possible moment all eyes now turn to mid-to-late November which political commentators say represents a real hard deadline given the EU parliament will need a deal to vote on if it is to be passed into the statute books before year-end, when the existing transition period ends.

The Australian Dollar is meanwhile providing much of the lift that is taking GBP/AUD higher given it is trending lower against all its peers over a one month period, with analysts saying much of the underperformance is being prompted by the RBA's signalled desire to cut interest rates again and potentially expand quantitative easing.

"The strong prospect of more RBA and RBNZ easing means AUD and NZD will struggle to develop interest rate support, despite their Covid outperformance," says Richard Franulovich, a foreign exchange strategist with Westpac in Sydney.

A key question for the Aussie Dollar going forward is how much of these expectations for further easing are already baked into the Aussie Dollar's valuations, and how much more weakness is there to be garnered from this story?

For now, any further talk of negative rates and expanded quantitative easing will likely weigh on the Australian Dollar but saturation point is surely nearby.

A strong start to the new week for global equity markets and commodity prices are meanwhile helping to limit some of the Australian Dollar's downside potential given the 'high beta' the Aussie Dollar embodies. 'High beta' refers to the currency's correlation with equity markets (the S&P 500 being the preferred reference point), meaning when markets rise the Australian Dollar rises too.

"We're starting with equity futures on the front foot. That provides relief for AUD and NZD, and maybe this week's top currency will end up being CAD, the clear regional winner when it comes to coping with Covid. AUD is helped by good news in the virus, and maybe all the RBA dovishness is now in the price?" says Kit Juckes, Global Head of FX Strategy at Société Générale.

However, with U.S. politicians still squabbling over an economic rescue package, and the potential for uncertainty to rise into the November U.S. election, further bouts of 'risk off' market conditions are possible which could pressure the Aussie Dollar lower and aid the recovery sequence in GBP/AUD further.