The Pound-to-Australian Dollar exchange rate is in the middle of a long-term range that it appears glued to and the prospects of a near-term trend change in the currency appear relatively limited.

A look at the daily GBP/AUD chart shows that the exchange rate has been trending sideways since the start of June and has carved out a range with ~1.8450 at the top and ~1.75 at the bottom.

At the present time, the pair looks to be locked towards the middle of the range, albeit with an apparent preference to go lower in the immediate term. 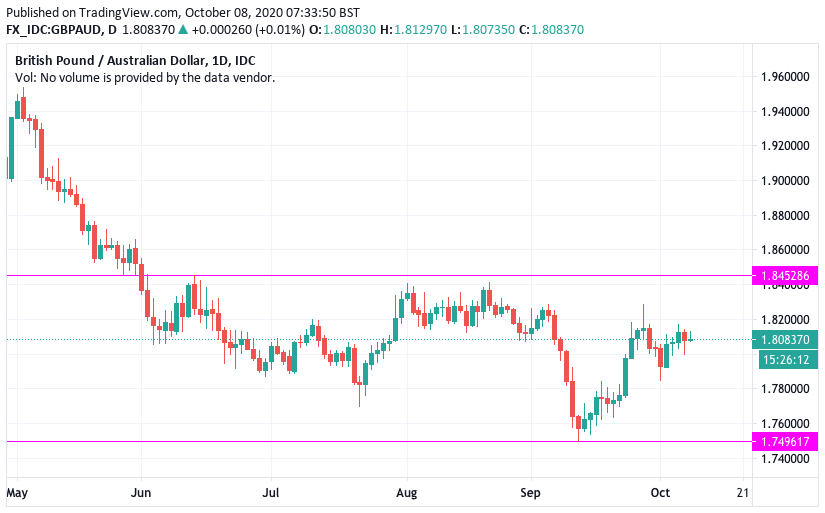 But, zooming out we are able to say just how significant this range is.

If we look back we can see the same level has been in control of the pair for the majority of the time between the present and the start of 2018: 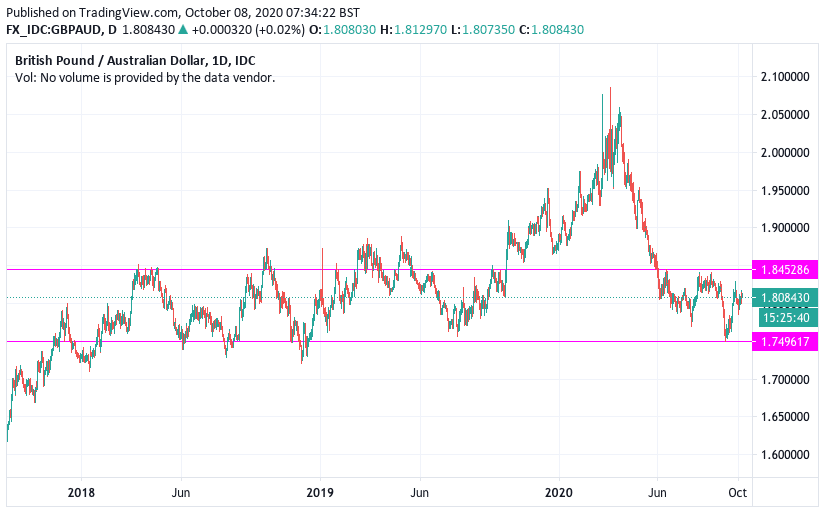 Above: Longer-term chart of GBP/AUD showing stability of the key range. If you have looming GBP/AUD payments and would like to secure today's rate for use in the future, learn about the tolls available to you here.

Granted, the exact boundaries of the range are up for debate but the illustrative power of the above chart is clear: the GBP/AUD is in a comfortable place and it will take a significant fundamental news event or shift to break the pair out of the range.

For a break to the downside in GBP/AUD we would look for a significant appreciation in the value of the Australian Dollar, which could ultimately transpire if the country's economy latches onto another Chinese-lead global boom. In addition, Australia's economy will likely be supported by the relatively low incidence of covid-19 in the country, as well as the strong fiscal stimulus presented by the government.

"The Australian dollar has recovered fully, over time, from the sharp depreciation incurred during the acute phase of the crisis induced by the pandemic," says Asmara Jamaleh, Economist at Intesa Sanpaolo. "The recovery reflects the improvement of the domestic picture, thanks to the massive fiscal and monetary stimulus measures put in place to counter the crisis, and of the overall picture at the global level as well, both in terms of macro data – with particular respect to the outlook for the Chinese economy – and of the financial markets."

However, Australian Dollar exuberance will likely be contained by the prospect of Reserve Bank of Australia interventions over coming months, indeed the September policy meeting of the RBA suggested a 'mini' rate cut was likely.

"The Board continues to consider how additional monetary easing could support jobs," read a statement from the RBA.

"The central bank has in fact openly declared it intends to lend particular attention to the fallout on the labour market, mainly on the unemployment rate, in implementing its policy actions," says Jamaleh.

Markets are expecting another rate cut to 0.10% in November, while an expansion of the RBA's quantitative easing programme is also a source of speculation.

The rule of thumb in foreign exchange markets is that when a central bank signals it will ease further, the currency it issues devalues.

At the very least, the trajectory of RBA policy might keep a cap on the Australian Dollar over coming days and weeks, further entrenching GBP/AUD around current levels.

"The Australian dollar could prove weaker than expected, in particular if interest rates are cut," says Jamaleh.

A potentially greater disruptor for the GBP/AUD would be a more sustained rally in the British Pound on the back of an EU-UK post-Brexit trade deal.

While anxieties are elevated there has been a distinct movement from both the EU and UK towards the striking of a trade deal.

Indeed we note in our latest GBP coverage that a major hurdle to securing a deal could be in the process of falling as it is hinted that an agreement on future state aid and governance is possible.

It looks as though fisheries will remain the major obstacle for markets to navigate going forward, and with French resistance looking entrenched talks could extend into November.

Lingering anxieties should keep Sterling gains capped, thereby contributing to further GBP/AUD sideways trade. However, a deal could be the one trigger to a more directional and sustained move in this pair.

The British Pound is currently both highly volatile and trend-less at the same time, a consequence of markets reacting to the latest Brexit headlines but ultimately showing little conviction on whether now is a good time to buy or sell the Pound.

Traders and algorithms continue to be buffeted by newswire reports quoting unofficial sources with an insight into Brexit developments which trigger sharp short-term moves but ultimately offer little substantive information to bet on, while official briefings by politicians on both sides remain thin on detail and invite speculation.

This theme will likely persist and Pound Sterling is being tipped to retain a volatile tone over coming days as anticipation builds ahead of a crucial October 15 European Council summit of EU leaders, where concrete details on the outlook will likely be forthcoming.

Ahead of the summit, the mood has improved somewhat with recent developments appearing to suggest that one major sticking point that had held back negotiators reaching a deal has been potentially overcome.

Perhaps there is an ommission here, but headline-hungry foreign exchange traders whose ears are piqued to nuance might be inclined to see some progress.