The Australian Dollar rose ahead of the weekend after the Australian government moved to pump up the domestic housing market, but gains were ultimately reversed as global equity markets turned lower once more and the Dollar extended its September rally.

“AUD, which has been one of the harder hit currencies this week, has posted a recovery aided by both the stabilisation in global sentiment and the rally in bank shares after the Australian government made it easier for them to approve mortgages,” says Jonathan Pierce, an FX trader at Credit Suisse.

The Aussie had firmed earlier in the day after Treasurer Josh Frydenberg said the government would make changes to how mortgage rules are enforced.

So-called responsible lending standards, created after the 2008 financial crisis, will no longer be enforced by the Australian Securities and Investments Commission or anybody else, Frydenberg revealed in a press conference from Parliament House in the Australian capital Canberra.

"Our current regulatory framework, with respect to lending, is not fit for purpose. It's become overly prescriptive, it’s become increasingly costly, it’s become increasingly complex and responsible lending has become restrictive lending. And the Governor of the Reserve Bank has pointed out that banks have become risk adverse to the point that they don't want to make loans they fear may be going bad," Frydenburg said. "We need our banks to be extending credit."

Abandoning enforcement of the rules could help some Australians gain access to mortgage credit that would otherwise not have been available and may help to resuscitate a housing market that had cooled even before the coronavirus came along, but following years of runaway price growth.

The decision immediately boosted domestic lenders as markets judged the move would increase their profitability; the relative outperformance of these stocks in turn attracts foreign investor inflows which bids the value of the Australian currency.

While the initial currency reaction suggests the moves to be market friendly, some economists who witnessed the implosion of the global financial system in 2008 owing to the sub-prime crisis are highly sceptical of the decision.

“The government has the ability to expand the fiscal deficit to a threshold determined only by the capacity of AUD to hold up. And what is the response? To tell banks to return to a housing bubble, exacerbating problems in society, making businesses less price competitive, starving non-housing firms of attention, making the banking system even more reliant on global wholesale money markets and, as the historical track record *everywhere* shows, eventually ending up in bad loans, which will be repackaged and sit with the tax payer,” says Michael Every, a strategist at Rabobank.

"And making a mockery of the idea of prudent regulation. THAT is where the fiscal capacity the RBA is offering is going. I long said that when the RBA goes full QE, it will be to buy shonky [mortgage backed securities] rather than for a fiscal deficit for mega infrastructure projects…and that indeed seems to be the journey we are on,” adds Avery.

The Australian Dollar’s overnight gains didn’t last for long before the U.S. greenback turned higher against all major currencies except for the Kiwi, threatening to make for five days on the bounce that the ‘high beta’ Aussie has spent in retreat from its North American cousin.

The Pound-to-Australian Dollar exchange rate was relatively unchanged for the session as a straitjacketed Sterling also underperformed, although Westpac suggested this week that it has bottomed out and may be likely to trade in a 1.7850-to-1.82 range through year-end.

The Australian Dollar is now just 0.20% up on Sterling over the course of the past month, an advantage that is rapidly shrinking. In the same time period the Aussie has lost 2.37% in value against the Euro and 4.56% against the U.S. Dollar. 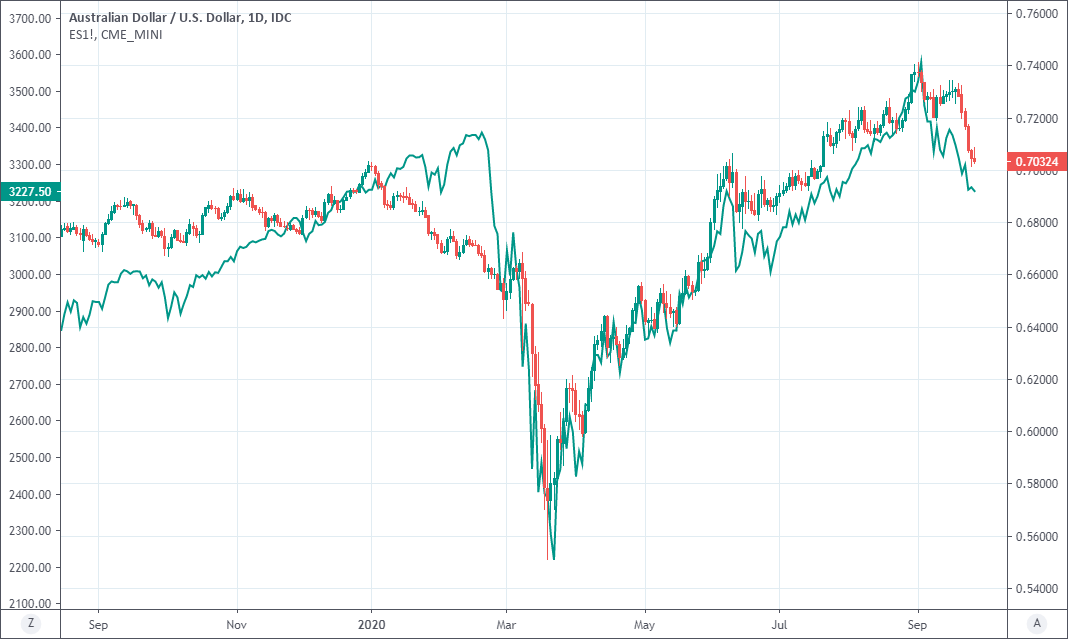 “We see further downside to AUD/USD in the near term.  The recent correction in the global equity markets can encourage portfolio managers to be sellers of AUD ahead of the month‑end fixes. Lower commodity prices, including iron ore prices, will also undermine AUD,” says Carol Kong, a strategist at Commonwealth Bank of Australia.

Australia’s Dollar has a strong positive relationship with the S&P 500, which has fallen almost three percent this week and more than -6% for September, with U.S-China tensions and their effect on the Yuan, an ongoing absence of fiscal support in the U.S. and now mixed messages from the Federal Reserve (Fed) on the outlook for U.S. interest rates all seen at play.

“Media reported warnings from scientists that the first coronavirus vaccine will not likely prevent people from infection.  We are not surprised.  We flagged here previously that vaccine effectiveness can be low and variable.  Effectiveness is one of hurdles the world economy faces after the development of a vaccine.  We also noted the implications for currencies in the global race for a vaccine. For example, AUD may outperform if the University of Queensland delivers its vaccine first to market,” says Kong.