The 'high beta' Australian Dollar - a term that describes the currency's strong correlation with the S&P 500 stock market index - fell amidst a broad-based sell-off in global stock markets on Thursday, with investors expressing caution over the faltering U.S. economic recovery and the Federal Reserve's apparent inaction.

The Fed delivered their July policy verdict overnight, opting to keep key settings unchanged but offering to do more should the situation warrant it.

In short, there was no major easing that investors - who have become 'addicted' to the deluge of money from the Fed over recent months - might have wanted, and the European trading session has been met with renewed selling. Reflecting the softening sentiment amongst investors, commodity prices are also shedding value with oil, natural gas, silver, gold, copper and iron ore all going lower.

This makes for a cocktail of conditions in which the Australian Dollar would be expected to lose value; after all AUD maintains the highest correlation with movements in stock markets in the G10 while its status as a 'commodity currency' betrays its soft underbelly when commodities are falling.

The Pound, U.S. Dollar and Euro have all obliged to the Aussie's weakness and have advanced, and further gains are possible should markets and commodities fall back further over coming days.

With regards to the Pound-to-Australian Dollar exchange rate in particular, we have been watching Sterling's recent grind higher with interest noting that it could now be forming a base against its Australian counterpart.

However, we are still cautious of the recovery in GBP/AUD - from lows at 1.7695 to 1.8158 - as merely being a correction within a more prolonged multi-month decline, after all, the exchange rate was as high as 2.05 back in April.

But if the pair can crack above the July 1.82 high, drawn in the below chart, we would become more confident that a turnabout might be underway and that a short-term rally in GBP/AUD is likely to transpire. 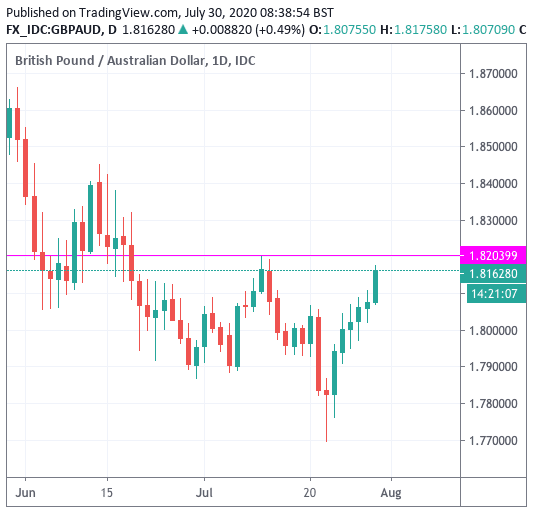 But for now, Sterling needs to put in more work to convince that it is turning the tide against the Aussie unit.

Domestic Australian data meanwhile sheds some light on an economy that continues to struggle, with building approvals showing an anaemic recovery.

Building approvals fell another 4.9% in June, following a sharp 15.8% contraction in May which means approvals have now declined for four consecutive months and are down 22.9% from their level in February. Markets had been looking for a 1.5% increase which underscores the disappointment.

Compared with February, approvals were 31.6% lower in Victoria, 29.0% lower in NSW and 24.1% lower in Tasmania, highlighting a relatively larger economic impact from COVID-19 on these States.

The outlook for the sector - a key driver of Aussie wealth - remains subdued.

"Strong headwinds remain given rising unemployment and weaker incomes which will continue to weigh on housing demand and prices. The housing market and residential construction will continue to face some challenging conditions ahead," says Janu Chan, Senior Economist at St.George Bank in Sydney.

Markets will keep an eye on Australian private sector credit, due for release at 02:30 BST, for further signals on the health of the economy.

Private sector credit rose sharply in March as businesses dashed for cash and drew down their credit lines in the face of the surging covid-19 crisis. A similar pattern repeated in April but demand faded slightly in May.

"It’s expected to be down a bit more in June, but that’s only to be expected as the housing market has slowed considerably, as we saw from Australian building approvals. Meanwhile businesses are just trying to survive, never mind borrowing to invest," says Marshall Gittler, Head of Investment Research at BDSwiss Group.