The Australian Dollar was in retreat Thursday amid rising tensions between the U.S. and China but it's tipped by analysts as a buy-on-dips currency as many still see it advancing beyond recent highs in the months ahead.

Australia's Dollar was back below the 0.70 handle and softening further as souring U.S.-China relations undermined risk appetite at the global level while a further surge in new domestic coronavirus infections overshadowed a stronger-than-expected jobs rebound for June.

President Donald Trump was reported by The New York Times to be weighing the merits of imposing visa restrictions on Chinese Communist Party officials barely more than a day after the White House signed the Hong Kong Autonomy Act, which threatens sanctions for those involved in imposing China's new national security law on the city.

"Riskier assets are falling in value, whilst safe-haven assets are rising as investors pay closer attention to global geopolitical tensions. Stocks are down, bonds are up, and the USD, JPY and CHF are all benefiting from haven demand," says George Vessey, a strategist at Western Union Business Solutions. "GBP/AUD is in the red on the day despite the risk-correlated Australian Dollar sliding against most major currencies." 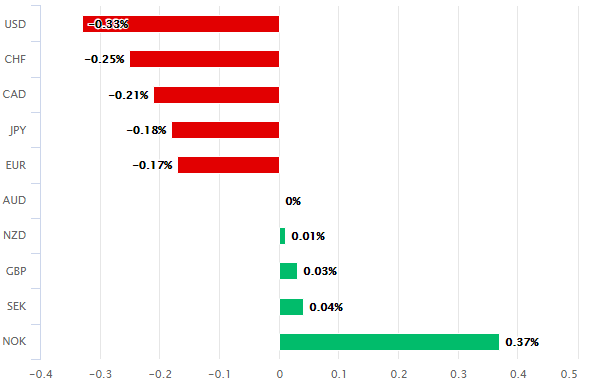 Escalating tensions risk turning a trade and diplomatic disupute into a modern form of cold war, and were enough Thursday to offset an earlier double dose of vaccine optimism and signs of a Chinese economic recovery.

Moderna and Oxford University had lifted sentiment when claiming progress in developing a treatment while official figures suggested Thursday that China's economy grew by 11.5% in the second quarter and at an annualised pace of 3.2%, paring back much of its earlier coronavirus-inspired loss, although weak retail spending took some of the shine off the data.

For the Australian Dollar and markets more broadly, what might matter most in the short-term is whether January's 'phase one deal' that ended the earlier trade war holds up and if two sides refrain from new tariffs, as they would further challenge a global recovery that remains at risk from a still-live virus threat.

"Victoria posted the highest increase in daily infection despite stay-at-home orders, suggesting the lockdown measures are set to remain for longer. Incidentally, AUD is facing some negative spillover from the correction in Chinese equities and the yuan, having the highest correlation in G10 with CNY," says Francesco Pesole, a strategist at ING. who looks for an AUD/USD fall back to 0.67 on a one-month horizon ahead of a return to 0.70 around the turn of the year. "AUD/USD may still prove unable to decisively break above 0.7000 today, AUD/NZD could soon be back at 1.0600." 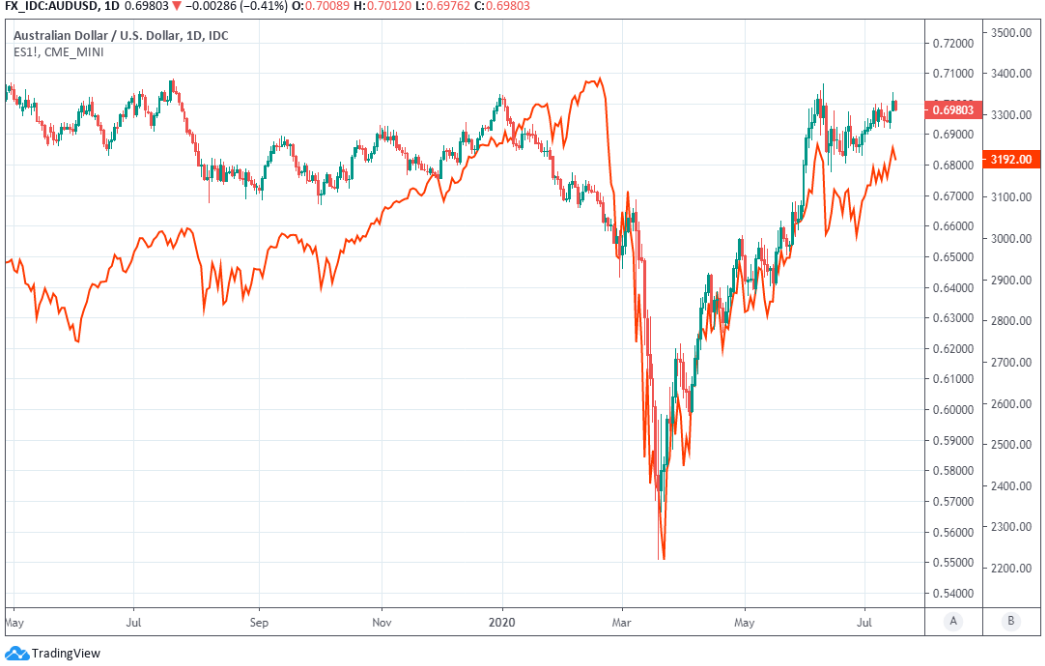 Australian coronavirus infections were on course to cross the 11k threshold before the week is out Thursday after another day in which more than 200 new cases were detected on the mainland, which has placed its two largest states that are home to more than 40% of the population back into 'lockdown' in July. This is after having had early success in all but extinguishing the virus on Australian territory during March.

"The Australian dollar is back at pre-crisis levels thanks to a favourable outlook and generally improved risk sentiment. We continue to see upside potential in the medium term, but the path is likely to be bumpy, especially in the case of risk-off," says Elisabeth Andreae, an analyst at Commerzbank, who looks for an AUD/USD rate of 0.70 at year-end and 0.73 by the end of 2021. "We see the greatest risks to our forecasts in a renewed rise in general risk aversion."

U.S.-China tensions, the second wave of coronavirus and an  inevitable unwinding of the gains seen in Chinese stock markets earlier this week have all served to pull AUD/USD back below 0.70 while placing a question mark over the outlook for the Antipodean unit.

"There are a number of factors both for and against strength or weakness in the Australian dollar," says Patrick Bennett, a strategist at CIBC Capital Markets. "We conclude that the balance of those factors points to headwinds against further gains over the near term. Of the medium to longer-term outlook into 2021 and beyond, we are constructive on prospects for outperformance. This view instructs that we recommend to be buyers of AUD on occasions of weakness." 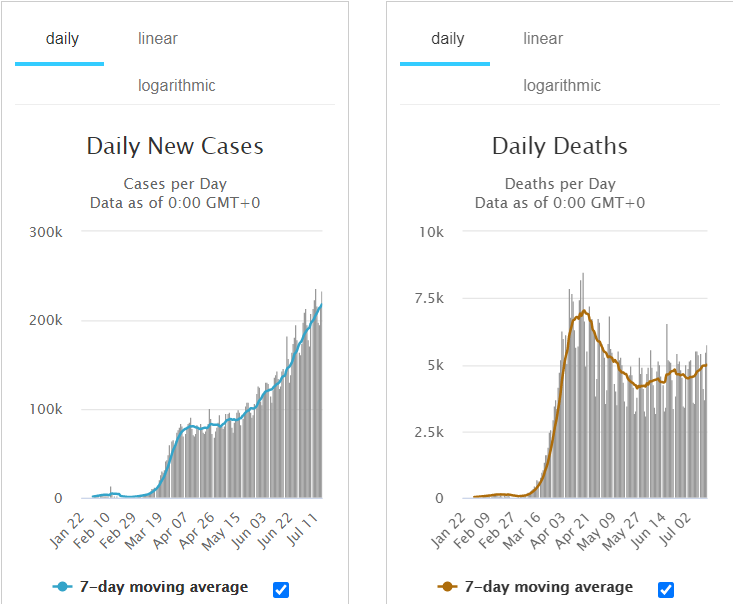 The Aussie was among the first to recover its coronavirus related losses after having suppressed the pneumonia-inducing disease by early April and as a commodity-backed as well as China-exposed currency, it's well positioned to benefit from a global economic recovery once it's underway and assured.

But CIBC's Bennett advocated this week that clients of the bank use any AUD/USD retreat back to 0.6670 as a buying opportunity, although the Aussie remained a way above there on Thursday.

At just less than 0.70 AUD/USD had recovered all of its 2020 declines  but was facing resistance from the 61.8% Fibonacci retracement of the 2018 downtrend, as momentum ebbs from the market.

"AUD/USD is off yesterday’s high of around 0.7038 but is still trading near the upper‑end of its five‑week 0.6800‑0.7000 range. We expect AUD/USD to remain within this range for now," says Elias Haddad, a strategist at Commonwealth Bank of Australia, who forecasts an AUD/USD rate of 0.72 for year-end. 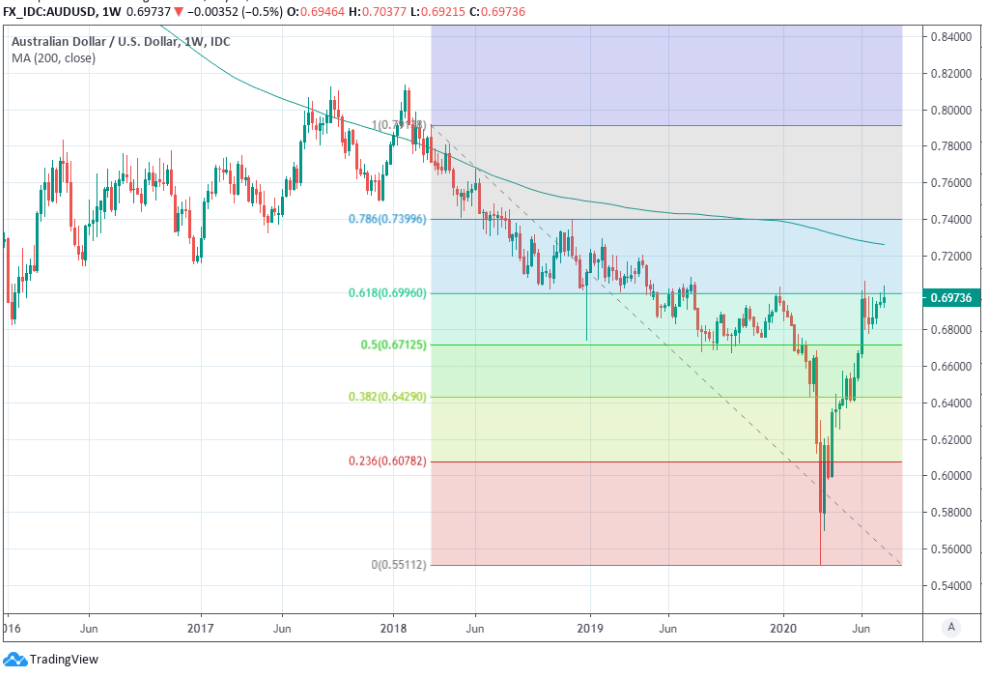 Above: AUD/USD at weekly intervals with Fibonacci retracements and 200-week (green) moving-average.