The Australian Dollar advanced on a majority of major rivals Wednesday but was eyeing new highs against the U.S. Dollar as tensions between Washington and Beijing were overlooked amid progress in pursuit of a coronavirus vaccine.

Australia's Dollar rose against all major rivals except the Pound and Yen Wednesday, but was just inches from new 2020 highs against the U.S. Dollar.

This is after Moderna said late Tuesday that its experimental coronavirus vaccine had "induced rapid and strong immune responses" in 45 patients while noting that it "remains on track to be able to deliver approximately 500 million doses per year, and possibly up to 1 billion doses per year, beginning in 2021."

"US equity futures traded higher, likely supported by the optimism about a coronavirus vaccine," says Carol Kong, a strategist at Commonwealth Bank of Australia. "AUD was likely supported by the strong sales of Australian government new bond issuance. Similarly, the strong overseas sales of New Zealand’s government 2041 bonds may contribute to some strength in NZD/USD over the next week (settles 21 July)."

Vaccine progress is a possible solution to second waves of infection in the U.S., Australia and others as well as the still growing global outbreak.

It could also bolster the global recovery and give investors reason to keep buying stock markets while selling the increasingly reviled U.S. Dollar.

Stocks and risk sensitive currencies like the Aussie rose overnight and into Wednesday while remaining largely deaf to an increasing deterioration in relations between China, the U.S. and others in the world. 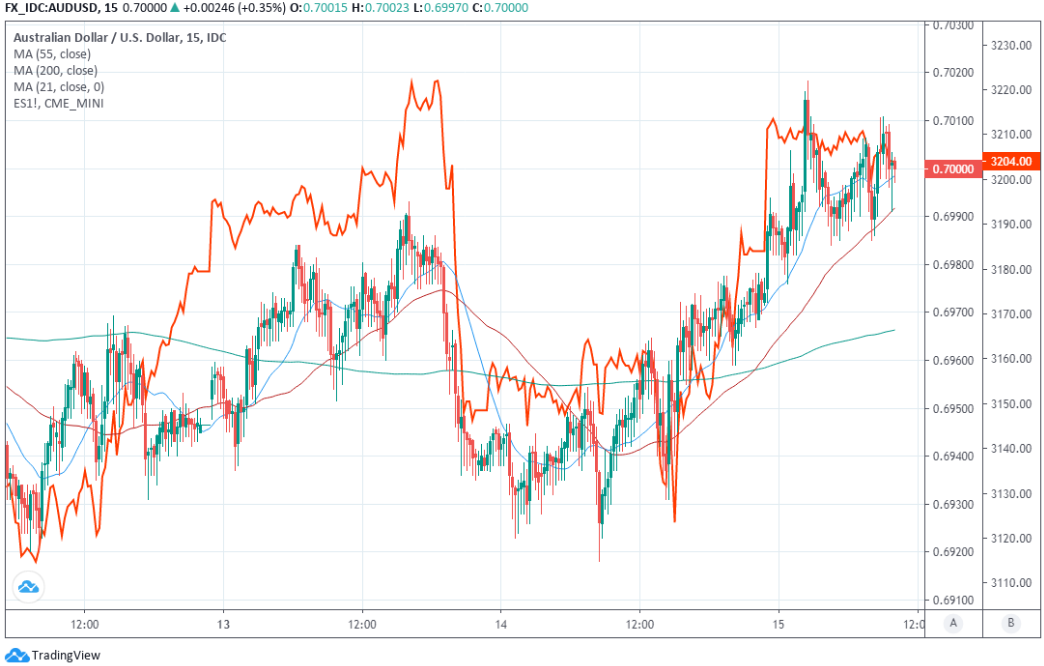 He also said the U.S. could impose "massive tariffs" on imports from China if desired and warned that more actions are likely.

The remarks didn't deter investors from stocks or the Aussie and gave no help to a flagging U.S. Dollar that's fallen steadily from favour since the Federal Reserve flooded global markets with liquidity and fiscal policymakers took action to minimise damage to their economies. 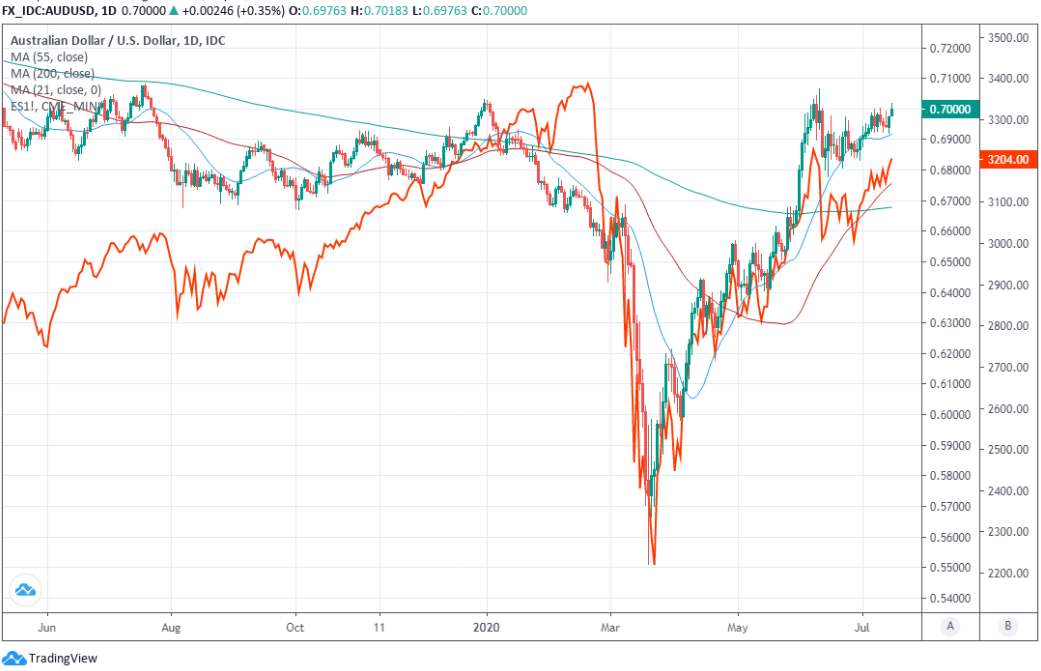 Investors have fled the U.S. Dollar in their droves while Australia's commodity backed unit has benefited from its exposure to a recovering Chinese economy as well as comparatively lesser damage from the crisis, given the government's swift initial containment of the disease.

"The .7031/62 resistance area, which consists of the December and June highs, remains in sight. This may cap again but it should be noted that a rise above it would introduce a target of .7284, the 55 month moving average," says Axel Rudolph, a senior technical analyst at Commerzbank.

U.S. Dollar losses have aided the AUD/USD rate higher since March, along with an eagerness among investors to get positioned for a global economic recovery, leaving the exchange rate within inches of fresh 2020 highs while testing solid technical resistance at the 0.70 level.

Commerzbank's Rudolph says a sustained move above 0.70 would open the door for a challenge of 0.72, a level that's not been seen since early 2019, although the Aussie must first sustainably overcome the 61.8% Fibonacci retracement of its 2018 downtrend. 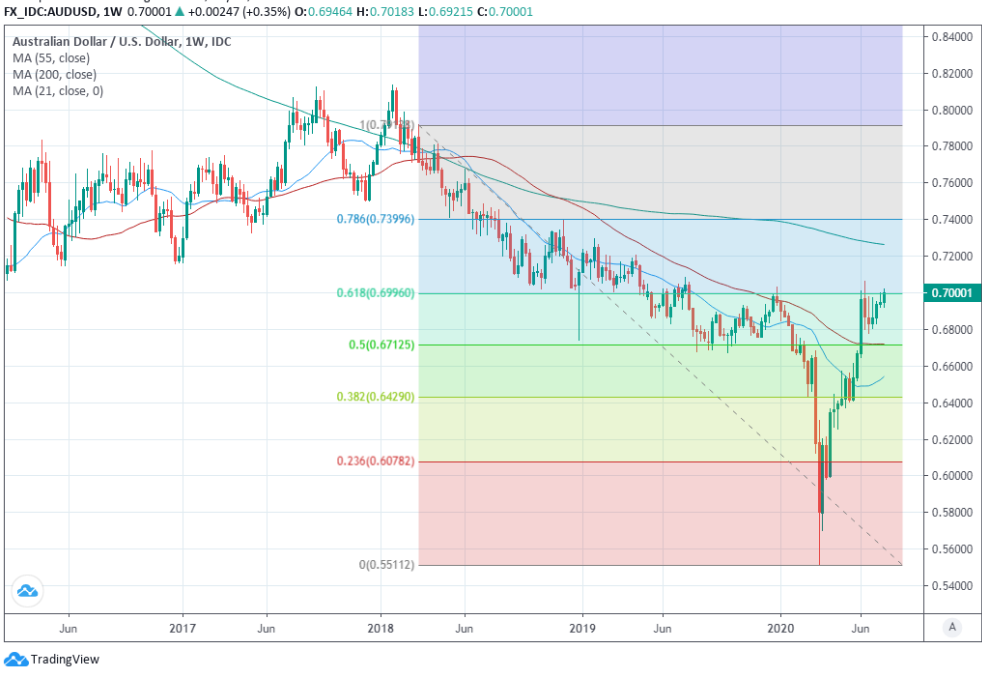 Above: AUD/USD at weekly intervals with Fibonacci retracements and 21, 55 (red) & 200-week (green) moving-averages.

Australia's Dollar had been under pressure for years before the coronavirus came along as a slowing economy and waning inflation pulse undermined the outlook for domestic interest rates while a rip-roaring U.S. economy lifted the greenback through much of the Trump administration's current term in office.

The tables are now turning on both Dollars and recent price trends could endure at least until the final quarter of 2020.

Aussie gains and U.S. Dollar woes are both rooted in optimism about the global economic outlook but the greenback is also burdened by comparatively greater damage and a looming election that could portend an upset for the outlook if it results in a regime change at the White House.

The U.S. economy contracted by -5% in the opening quarter, more than all other comparable rivals except China, while polls suggested Wednesday that President Trump faces an uphill battle to win re-election in November.

"AUD/CAD, our favourite way of buying AUD, has continued to grind higher despite signs that Canada's Covid strategy is better than elsewhere," says Kit Juckes, chief FX strategist at Societe General. "AUD/USD has moved above 0.7 again too and at least this time it's done so gradually and RSIs aren't stretched yet. We'll stay long AUD for now. One of AUD's biggest supports is that nominal yields are among the highest in the major liquid markets."