- AUD in retreat on risk aversion and caution at the RBA.
- RBA warns of uncertain path back to pre-virus economy.
- As Melbourne goes back into lockdown over 2nd wave.
- U.S. hits out on Hong Kong, Trump talks "China Virus".

The Australian Dollar underperformed Tuesday after nearly a fifth of the population was placed into fresh 'lockdown' and the Reserve Bank of Australia (RBA) warned of an uncertain path back to the pre-coronavirus economy.

Australia's Dollar was down against all major rivals except the Kiwi and Swedish Krona as risk and commodity sensitive assets fell from favour with investors, leading to U.S. Dollar gains across the board.

This was after the RBA adopted what was perceived as a more cautious tone.

It acknowledged that Australia's economic downturn was less severe in March and April than policymakers had envisaged, before noting that retail spending has begun to recover since new infection numbers began to fall.

But it also said uncertainty about the virus and future of the economy is impacting consumption and investment, which could limit the recovery.

"We would expect the more cautious theme to cap the currency close to 0.70 - certainly the language is less supportive this month versus last," says Robert Rennie, head of financial market strategy at Westpac. 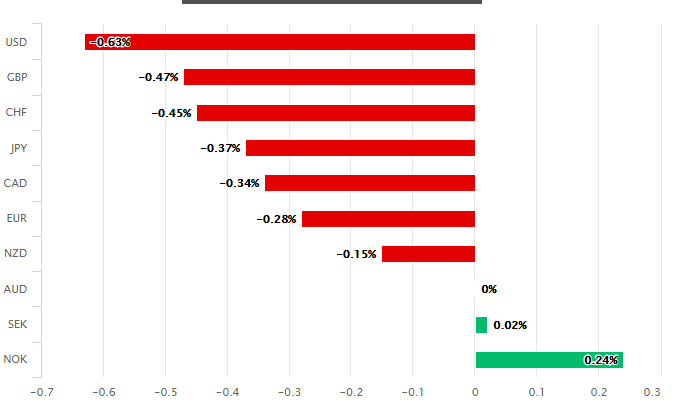 The RBA left its cash rate unchanged at 0.25%, with the three-year yield target also at 0.25%, while the bank said it'll do "what it can to support jobs, incomes and businesses and to make sure that Australia is well placed for the recovery."

"The long shadow the pandemic is casting is changing the way we work, learn and live. The RBA inserted a new sentence around these changes by explaining that the pandemic is prompting many firms to reconsider their business models," says Besa Deda, chief economist at St George Bank. "The RBA did not mention the currency. After hitting an 11-month high of 0.7063 on June 10, the AUD/USD exchange rate has pulled back and in much of the past month has stuck to a trading band within around 0.6775 - 0.7005."

Policymakers took parts of the market by surprise when for a fourth month they didn't mention the Aussie or its double-digit recovery off March lows when at any other point in recent history they might've complained that strength was risked export competitiveness and the inflation target.

"This is interesting to us as a rallying currency is unhelpful in such times, regardless of border closures. Incidentally, geopolitical tensions were again not mentioned," says Cherelle Murphy, a senior economist at ANZ.

Tuesday's policy update came just ahead of a decision by Victoria state to place the metropolitan area of Melbourne and Mitchell Shire, an area that is home to nearly a fifth of Australia's population, back into 'lockdown' from Wednesday amid an increase in coronavirus infections.

Australia's Dollar has been a star performer in recent months thanks in no small part to early success in containing the first wave of coronavirus infections, which has meant a lesser hit to the economy and lesser damage to a public purse that was already in comparatively good health going into the crisis.

"The pound is on track to suffer nine weekly losses out of the last ten weeks, currently 7.7% weaker over that period. A floor seems to be developing around the A$1.7870 area though, and today’s dovish RBA tone, coupled with localised lockdowns in parts of Australia, will perhaps limit further downside from here," says George Vessey, a strategist at Western Union Business Solutions.

The containment of the virus elsewhere and resultant bottoming of the global economy has also been a boon for the Aussie too, but investor appetite for the antipodean was curbed on Tuesday by concerns about the new lockdown as well as a rise in geopolitical tensions.

The second wave of coronavirus infections could constrain the tentative recovery of Australia's economy and for the length of time that it endures, could be weight around the ankles of the Aussie, and one that's made heavier by any further increase in geopolitical tensions.

"This will take a significant hit on Australia’s economy and weigh on AUD. Victoria’s economy is worth 24% of the national economy. And Melbourne’s population is around 20% of the national population," says Elias Haddad, a strategist at Commonwealth Bank of Australia. "AUD/USD eased towards the middle of its four‑week 0.6800‑0.7000 range."

Secretary of State Mike Pompeo condemned the "Orwellian assaults on the rights and freedoms of the Hong Kong people," citing the removal of books from public libraries and banning of slogans among other things since China imposed a so-called national security law on the city last week. 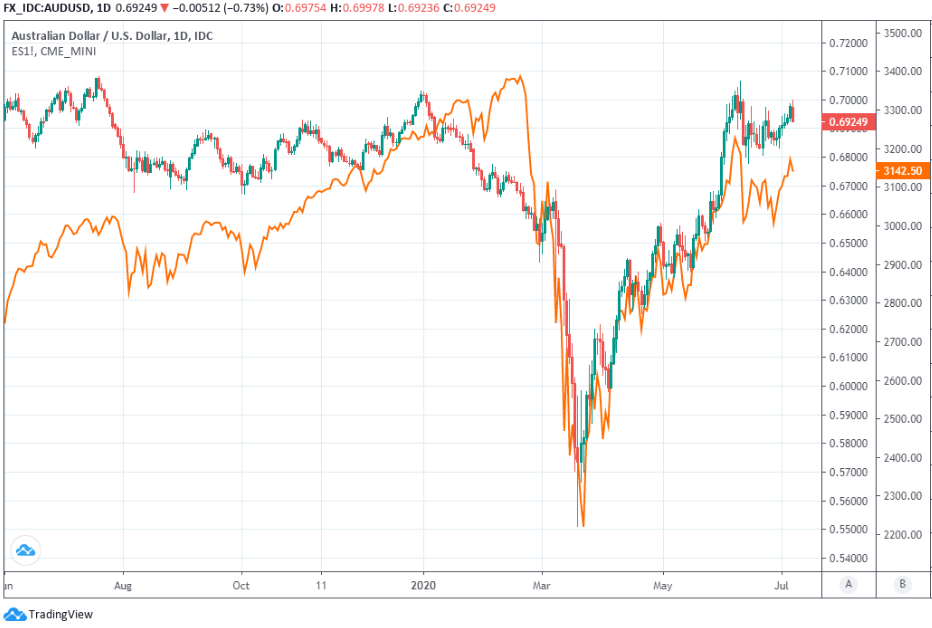 With the ink barely dry on the draconian National Security Law, HK authorities are now removing books from libraries, banning political slogans, and requiring censorship in schools. The U.S. condemns these Orwellian assaults on the rights and freedoms of the Hong Kong people.

Pompeo's statements were made on Twitter and with President Donald Trump having taken to describing the coronavirus as the "China virus" again, potentially indicating an election inpsired shift toward a more hawkish position on China.

We welcome the UK’s establishment of a Global Human Rights sanctions regime that promotes accountability for serious Human Rights abuses. The UK is a global leader and our close partner in promoting and protecting human rights. #GlobalMagnitsky

"With the Bank not appearing worried over the strengthening of the Aussie, we expect the currency to continue being driven by headlines and developments surrounding the broader market sentiment. As a risk-linked currency, it may continue to benefit as long as investors remain optimistic, especially against the safe havens, like the dollar, the yen and the franc," says Charalambos Pissouros, a senior market analyst at JFD Group.

Investors have been on edge of late, watching for a match that could light the tinderbox of tensions between the world's two largest economies and with eyes on the 'phase one deal' signed in January, which ended a two-year trade war that had seen the two impose tit-for-tat tariffs on imports from the other.

Any renewed tariff conflict between the U.S. and China could lengthen the road to recovery for the global economy and would knock investor confidence, while likely weighing on Australia's commodity and China-sensitive Dollar.

"China’s media sabre rattling around push backs against Huawei involvement in EU, UK and US 5G development and criticism of external interference in Hong Kong was also more evident and acted to unwind recent market optimism," says Westpac's Rennie. "The slide in sentiment undermined risk currencies (as noted with AUD) allowing a USD rebound after its recent weakness."

Aussie losses would be Sterling's gain however, and could help to stabilise the Pound-to-Australian Dollar rate after ten weeks of steep declines made worse by a comparatively worse coronavirus outbreak in the UK and fears about the future trade relationship with the EU. 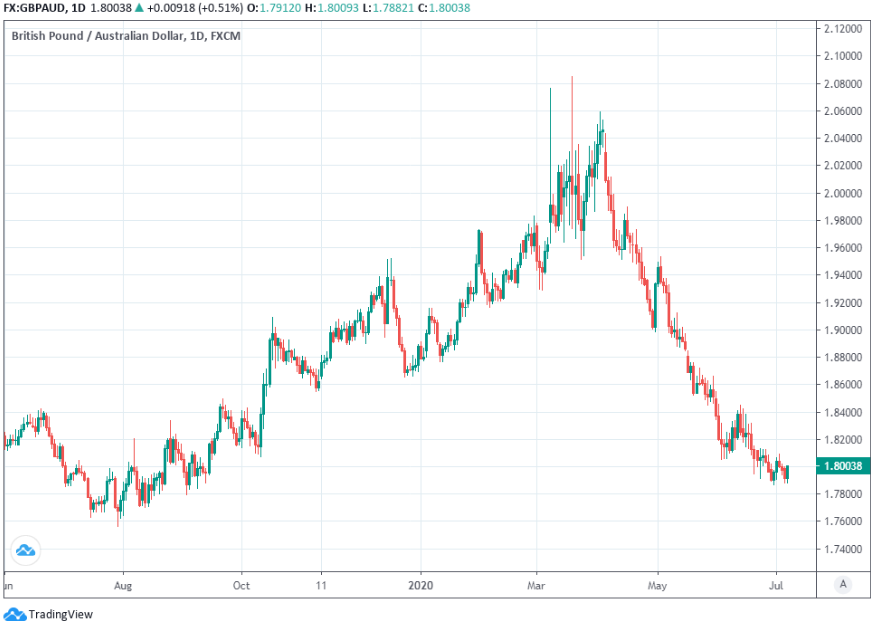