The Pound-Australian Dollar rate was in recovery mode Thursday and could be lifted back to 1.94 by weakness in the antipodean currency over the coming days, although the sell-off is not yet over and could easily resume if the AUD/USD rate is able to recover its footing.

Australia's Dollar was in all-out retreat as the U.S. and China traded barbs through the media and after the Australian Bureau of Statistics said the economy shed nearly 600k jobs in April, with the number of employed people falling from 13.01 million in March to 12.41mn last month, a larger decline than the -575k anticipated by the market.

The Aussie was among the worst performing major currencies Thursday, with job destructions putting it on the back foot to begin with, before losses were then compounded as the U.S. and China exchanged veiled threats through the media. But the Aussie had previously been an outperformer after rising 19% off its March lows to top out around 0.6559 at the end of the April month, before trading sideways from there through early May.

Antipodean underperformance enabled the Pound-Australian Dollar rate to bounce off the 61.8% Fibonacci retracement of the August 2019 uptrend and rise tentatively above the 200-day moving-average of prices at 1.8991. The exchange rate has fallen more than 2% in May and is down more than 8% from its late March peak around 2.08 but could have scope to recover further in the short-term if analysts are right about the outlook for the AUD/USD rate, which is an important influence on GBP/AUD. 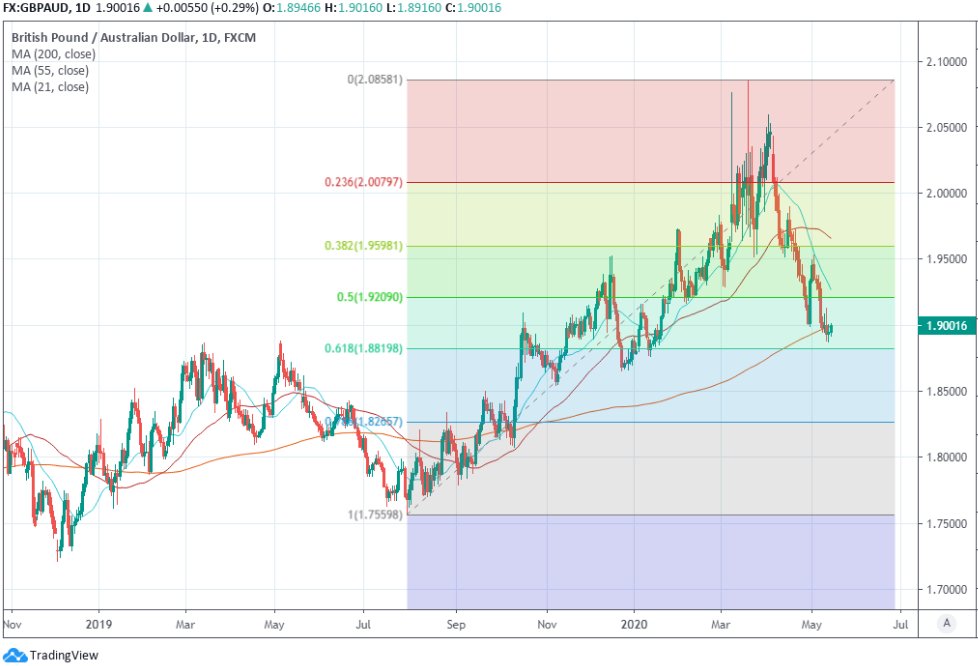 "AUD/USD remains within the ranges of the past fortnight but is on track to close lower for a fourth consecutive day, its latest blow coming from Australia’s April labour force survey" says Sean Callow, a strategist at Westpac. "AUD/USD rallies should falter in the mid-0.65s, with risks to 0.6300/50."

Australia's Dollar might have suffered as much on Thursday even without the job-loss given that China is its largest export partner and the antipodean unit has a strong positive correlation with the Renminbi. The Chinese currency was under pressure Thursday and faces further downside risks from the prospect of another trade spat with the U.S., where lawmakers are legislating and citizens are litigating in the courts over alleged Chinese government attempts to cover up the coronavirus that first appeared in Wuhan, rather than recognise the problem and then notify international bodies as well as counterparts.

Westpac says there's a risk AUD/USD falls to 0.6300 over the coming days and has advocated that clients bet on a fall back to 0.62 in the weeks to come, which implies gains ahead for the Pound-Australian Dollar rate irrespective of whether Sterling achieves the arguably unlikely feat of retaining its Thursday levels against the U.S. greenback, or if it falls further against the big Dollar. 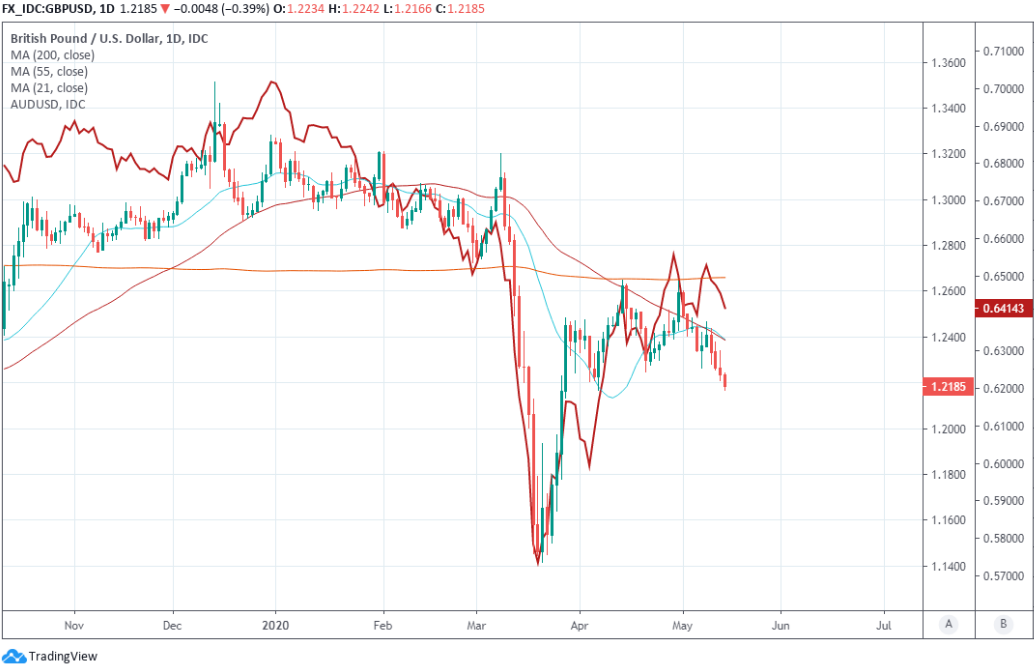 An AUD/USD rate of 0.63 would produce a Pound-Aussie rate of 1.9346 in the unlikely event the GBP/USD rate held Thursday's 1.2188 level and would still lift GBP/AUD to 1.9047 even if the analyst community is right about a prospective fall in Sterling to 1.20 against the U.S. Dollar. The Pound-Australian Dollar outcome would be even more favourable if Westpac's 0.62 target for AUD/USD gets hit while Sterling trades between 1.20 and 1.2188 against the U.S. Dollar.

The latter AUD/USD scenario would produce a Pound-Australian Dollar range of between 1.9354 and 1.9658, although it would also leave Sterling vulnerable to a recovery by the Aussie Dollar, which could happen if the U.S. and China were to avoid coming to blows again while the global economy continues to exit 'lockdown.' Calm between the U.S. and China combined with a slow but steady plod back toward normal levels of global activity would be a boon for the Aussie, but wouldn't solve Sterling's problems.

"The most intense phase of the health and financial crisis may be over, though that is by no means guaranteed. If the health and financial crises are over, the global economy should start to recover from this month or next. If these two crises are indeed fading, AUD/USD may already be past its low point several months sooner than our existing forecasts suggested," says Joseph Capurso, a strategist at Commonwealth Bank of Australia, who said Thursday the AUD/USD rate can still fall from current levels but that the risks of another dip below 0.60 are fading due to the possible stabilisation of the global economy. 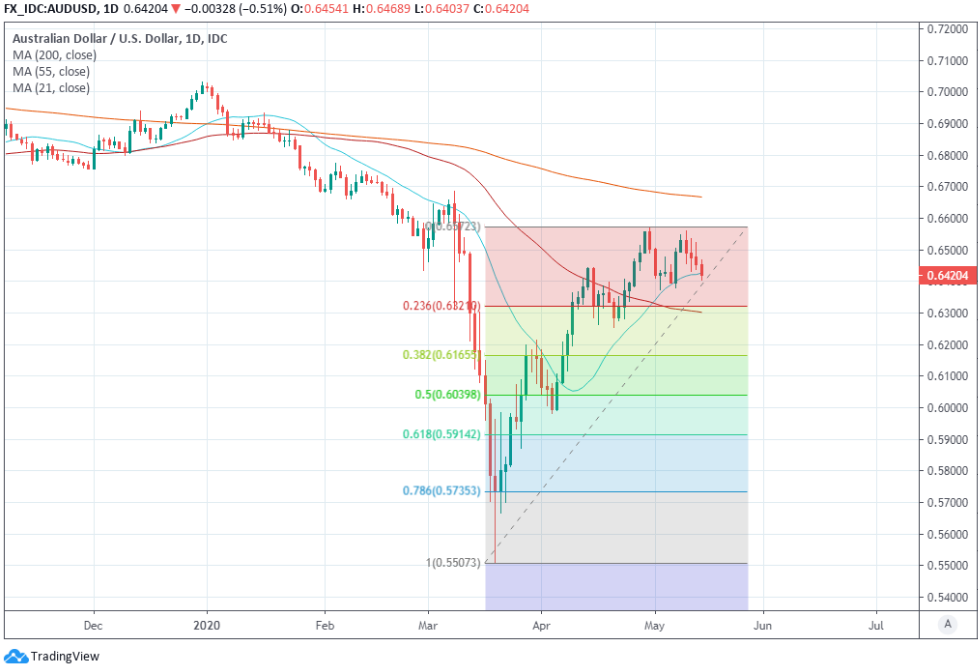 Above: AUD/USD daily chart with Fibonacci retracements of March 2020 rebound, the genesis of a possible AUD uptrend.

Australia and New Zealand have given the world a master class in the containment of infectious diseases and have both been largely free of new coronavirus infections for weeks, with both economies also in the process of reopening. European countries have been less succesful in containing the virus, although it is still in clear retreat on the old continent and economies there are also in the process of reopening.

Meanwhile, the UK remains burdened by the exorbitant costs of an ongoing 'lockdown' while carrying the developed world's largest current account deficit as a share of GDP. Brexit headwinds are back in the picture with the end-June deadline for making substantial progress in trade talks and requesting an extension of negotiations with the EU now looming, as the nation grapples with the coronavirus and its consequences while showing little interest in drawing out the already-long-running exit process.

These are all ingredients that could yet produce another sharp turn lower in the Pound-Australian Dollar rate and one that could easily see it back below the 200-day moving-average at 1.8991, although a stabilisation followed by recovery of the AUD/USD rate is arguably an essential ingredient for that. Strategists at Nomura have tipped a fall to 1.86 over the coming weeks while Pound Sterling Live opined in an April editorial that 1.8911 and 1.8461 could also be likely up ahead.