The Australian Dollar was seen trading lower in the wake of data showing a surge in unemployment during April owing to the coronacrisis, and economists say the unemployment rate should continue to rise over coming weeks.

The Australian-U.S. Dollar exchange rate fell to 0.6420 after official statistics showed almost a fifth of the labour force was unemployed (6.2%) or underemployed (13.7%) in April.

"The jobs data may not be enough to break the AUD/USD out of its well-defined 0.6375-0.6570 range, but a negative macro backdrop will likely send it significantly lower," says John Noonan, a Reuters market analyst.

The softening in the Australian Dollar - which also coincides with a broad-based risk-off tone to global markets - allowed the Pound-to-Australian Dollar exchange rate to go higher to 1.90. Looking at the daily chart, we see that the trend of depreciation in the exchange rate that has characterised the past month and a half has faded somewhat, with GBP/AUD looking to build a temporary support base: 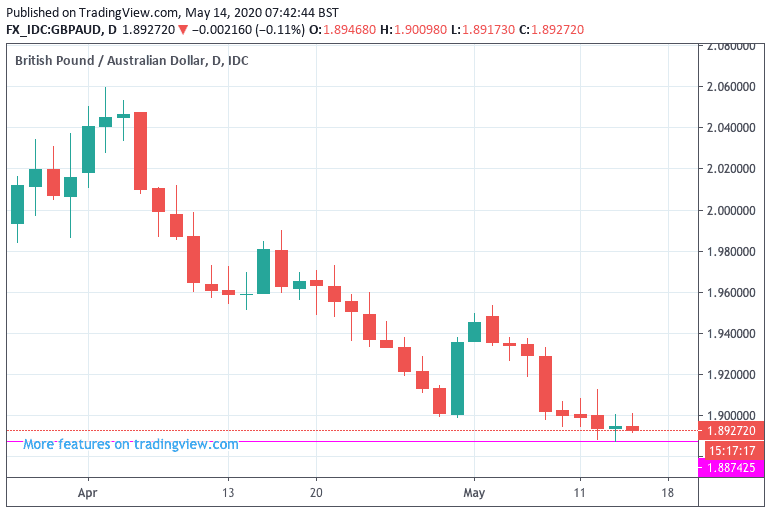 When taken together with people leaving the workforce, around 2.7 million people (about 1 in 5 people employed in March) either left employment or had their hours reduced between March and April. This was much greater than in previous years. 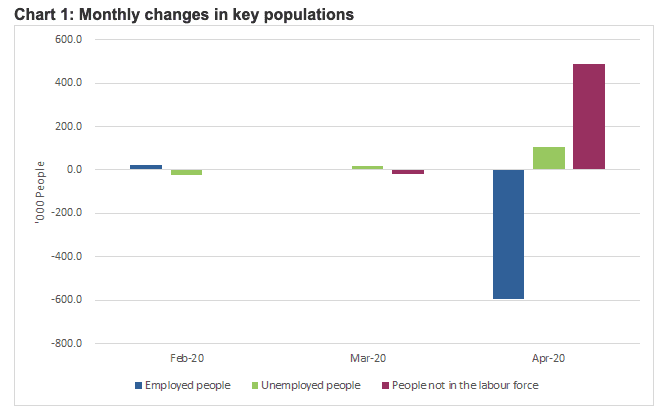 "A substantial number of jobs were lost in April after major restrictions on businesses took effect in late March. Employment declined 594k, the biggest monthly decline in the history of the series which began in 1978," says Janu Chan, Economist at St. George Bank in Sydney.

Hours worked meanwhile fell by 9.2% over the month, the largest on record, while data showed young people (15-24 year olds) experienced the largest fall in employment of almost 11%, more than twice that of any other age group.

"There is some positive news with the containment of the outbreak in Australia and plans to re-open economic activity. The scale of job losses witnessed over April is therefore unlikely to be repeated. Nonetheless, further weakness in employment is likely and the unemployment rate is expected to lift further in coming months," says Chan.

St. George forecast the unemployment rate to peak at 9%.

This demand for Australian debt by foreigners will inevitably create demand for the Australian Dollar, but Noonan says "any rally resulting from the bond-related flows should be viewed as a selling opportunity."

The Australian Dollar is however likely to remain responsive to global market conditions, tending to rally alongside global markets and decline when they fall.

"The rally in risk assets was fuelled by extreme central bank accommodation and faith the reopening of economies around the world would lead to a V-shaped economic recovery. In the past 24 hours both the RBNZ and Fed Chair Powell warned the economic recovery would be long and drawn out – anything but V-shaped," says Noonan.

With global stock markets edging lower over the course of the past week we have understandably seen the Aussie Dollar's recent strength fade.

"Adding to investor angst is growing friction between the U.S. and China, along with rising trade tensions between China and Australia," says Noonan. "Selling AUD/USD rallies with a stop above 0.6575 is the preferred strategy. A break below the recent range low around 0.6375 targets the 38.2 Fibonacci retracement at 0.6165."

However, Joseph Capurso, FX strategist at Commonwealth Bank of Australia says the negative impact of the labour market statistics should be short-lived, and those with an interest in the Aussie Dollar should set their eyes on looming Chinese data.

"AUD/USD can recover some of this week’s losses if tomorrow’s monthly Chinese ‘data dump’ is stronger than consensus as we predict. Beyond the near‑term, if the health and financial crises are over, the global economy should start to recover from this month or next. If these two crises are indeed fading, AUD/USD may already be past its low point several months sooner than our existing forecasts suggested," says Capurso.

China will release industrial production data at 03:00 BST, at the same time we will get retail sales data and fixed asset investment data as well as the country's unemployment rate.

China is Australia's main trade partner and accounts for the vast majority of export demand, therefore markets tend to view the Australian Dollar as a proxy for developments in China's economy.

A new issue to consider on the currency's radar is a potential trade spat between China and Australia. This week China banned beef imports from a number of Australian abbatoirs, a move which appears to be a warning shot over Australia's demands for an inquiry into China's role in the outbreak of the covid-19 crisis.

According to Australian Trade Minister Simon Birmingham, the Government was notified by Chinese authorities that the suspension is linked to labelling and health certificate requirements.

He said the suspensions were due to "highly technical issues", some of which dated back more than a year, arguing changes to export arrangements should be considered separately to the merits of an investigation into COVID-19.

We would imagine that while the ban has been blamed on technical issues, Australian authorities will be in no doubt that China is flexing a bit of muscle, signalling that it has significant leverage over Australia's economic fortunes via the trade channel and that it is not worth picking a fight with China over covid-19.

The developments concerning Australian beef follows weekend news reports that China is considering imposing hefty tariffs on Australian barley imports. However, for now it remains too soon to confidently suggest the two countries are headed for the kind of 'Cold War' on trade that we have seen between the U.S. and China, but we would suggest that this is certainly a risk on the Aussie Dollar's radar.