- Both AUD and GBP outperforming rivals in Feb.
- Markets see reduced chance of RBA rate cut
- But market is wrong on this count say ABN AMRO
- GBP/AUD springs off support at 1.92

The British Pound has advanced 0.60% against the Australian Dollar over the course of the past week in line with the broader push higher by Sterling, that leaves it the top performing major currency for the week ending February 14. 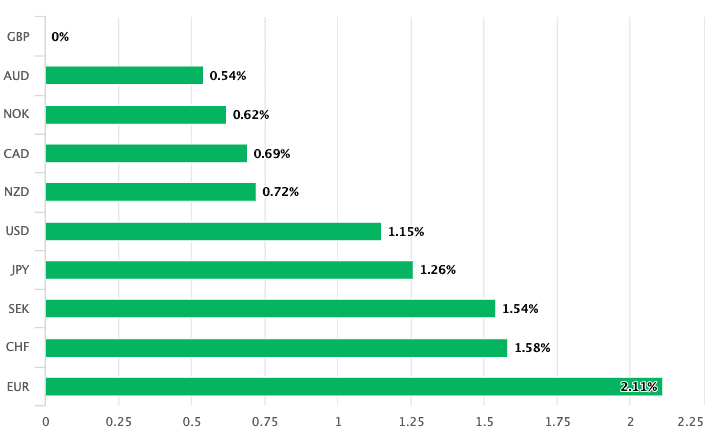 Above: Sterling's performance for the week ending February 14.

This has certainly been the case for the Aussie Dollar which has appreciated against most major currencies in February. 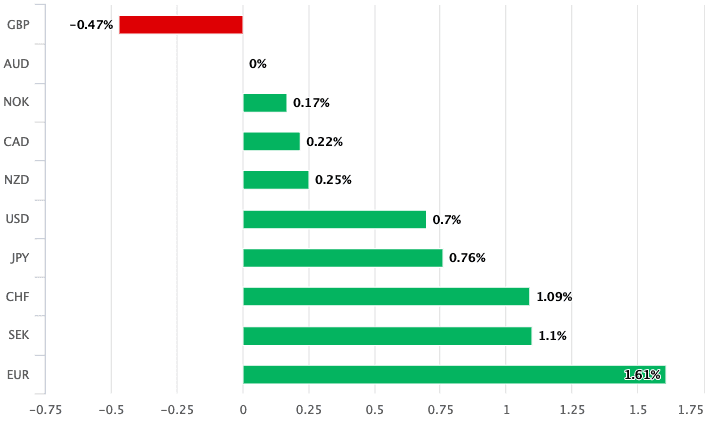 Above: AUD performance in the week ending February 14.

But, the market is wrong on betting that the RBA won't cut interest rates say analysts at ABN AMRO, the Dutch based global investment bank and financial services provider.

"We expect the Reserve Bank of Australia to cut official rates twice by 25 basis points this year (previously we had one rate cut) to support growth as well. Market consensus is for one rate cut. More than one rate cut will weigh on the Australian Dollar," says Georgette Boele, Senior FX Strategist at ABN AMRO.

ABN AMRO research shows the RBA might be too optimistic in their assessment for the Australian economy, noting that the domestic economy had been slowing ahead of the severe bushfire season, that reached a peak in January.

The economic of the bushfires might still not be fully understood, "they will likely have suppressed growth in Q4 and Q1 on the back of lower tourists’ arrivals, lower private consumption and lower farm output," says Boele.

The impact of the coronavirus on Australia is however also likely to pose a potential headwind to growth.

"The outlook for the Australian economy has also deteriorated because of fears of lower Chinese demand. We have downgraded our global growth forecasts due to the impact of the coronavirus. The first quarter will be dramatically weak, but Q2-Q3 will be stronger," says Boele.

However, RBA Governor Lowe told a panel discussion on Thursday that the domestic growth outlook had improved of late before playing down the risks posed by the coronavirus outbreak in China and reiterating the bank's earlier guidance suggesting the bar that must be overcome for it to cut interest rates again is now rather high.

"The net take-away was that the RBA, along with other global central banks, wish to focus upon areas of potential strength whilst acknowledging downside risks," says Tim Riddle, a macro strategist at Westpac.

Boele says the Australian economy will be more sensitive to the impact of a Chinese slowdown when compared to other economies because China is a major consumer of Australian commodity exports and a major beneficiary of Chinese tourism.

The outbreak has resulted in two-thirds of Chinese airlines grounded, while international airlines continue to extend their current restrictions on the country.

China’s slowdown in response to the coronavirus has meanwhile registered in global shipping with data showing transit rates falling to record lows as ships are turned away from ports.

The Financial Times reports the Capesize Index, which tracks freight costs for the largest carriers of dry bulk commodities such as iron ore, coal and grain fell into negative territory last week for the first time since its creation in 1999.

Coal and iron ore together account for by far the largest proportion of Australian exports.

There is a chance the RBA is underestimating the potential negative impact to growth that the coronavirus will deliver; the stance you take on the Australian Dollar therefore depends on who you are inclined to believe: the upbeat RBA or those analysts warning that it is too soon to gauge the coronavirus impact.

"We expect a negative impact on the economy of the bush fires and the coronavirus in the near-term. Lower growth in Q4 2019 and Q1 2020 will likely weigh on the Australian Dollar," says Boele.

However, ABN AMRO expect fiscal spending, higher medical demand and insurance pay-outs will support the economy in Q2 and Q3. 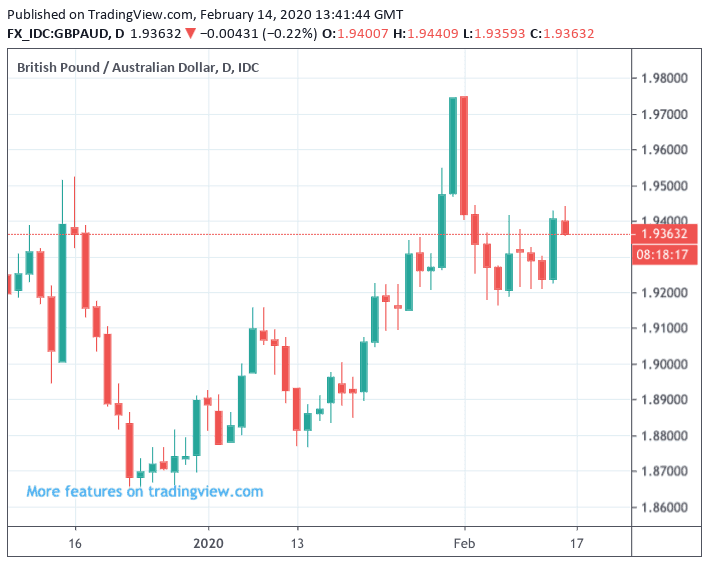 February's surge in the Australian Dollar's value pushed the Pound-to-Australian Dollar exchange rate back down towards a floor at 1.92, a level that it failed to materially break below. Holding that support region ultimately provided a solid base for the recovery we saw on Thursday, February 13 when it was announced the UK's Chancellor of the Exchequer Sajid Javid had resigned his post and was replaced by Rishi Sunak.

Markets are betting the move will mean the UK's Treasury will feel more inclined to deliver on Prime Minister Boris Johnson's spending promises, something that is being tipped to raise economic growth.

The GBP/AUD exchange rate rallied to levels above 1.94 in the ensuing bounce. We therefore forecast the GBP/AUD to remain relatively well supported as long as it remains above 1.92.