- China reluctant to do trade deal without end to U.S. tariffs.

- 'Phase one' unsigned and 'phase two' accord is ruled out.

- GBP boosted by election odds but there's a catch for the £.

The Australian Dollar was repelled from a three-month high Thursday by a Bloomberg News report that cast doubt over the longevity of the October 11 ceasefire in the trade war between the U.S. and China, which is threatening to scuttle the antipodean currency although the charts still point to further gains.

Chinese officials are said to be unwilling to entertain the structural reforms the U.S. is seeking in pursuit of a 'phase two' accord, which is necessary to end the trade war between the world's two largest economies that has wrought havoc on the Australian Dollar since early 2018, unless the White House drops the tariffs on the nation's exports to the U.S. They are said to doubt that it would be possible to reach such an agreement.

"AUD/USD and NZD/USD pared back some of their overnight gains following this news report," says Elias Haddad, a strategist at Commonwealth Bank of Australia. "USD is trading heavy after the FOMC signalled a pause to its mid‑cycle adjustment yesterday. The concern is the FOMC may be falling behind the curve in terms of protecting against a sharper slowdown in US economic activity and inflation."

An uneasy truce between the U.S. and China has lifted the Aussie and other risk sensitive currencies since an October 11 agreement averted an increase in U.S. tariffs that was planned for mid-month. But President Donald Trump already announced in August and September that new levies will hit all of China's remaining exports to the U.S. from December 15 and those tariffs are still due to go on if further progress in the negotiations is not made.

China is reportedly concerned the October 11 'phase one' agreement, which was said to have been struck but is not yet signed, will fall apart within weeks due to the "impulsive" behaviour of President Trump. Prospects for firming the pact were further dented Thursday by the cancellation of the November 16-17 APEC summit in Chile it was supposed to be signed at. The U.S. extended on Wednesday tariff exemptions for imports of goods worth $34 bn each year. 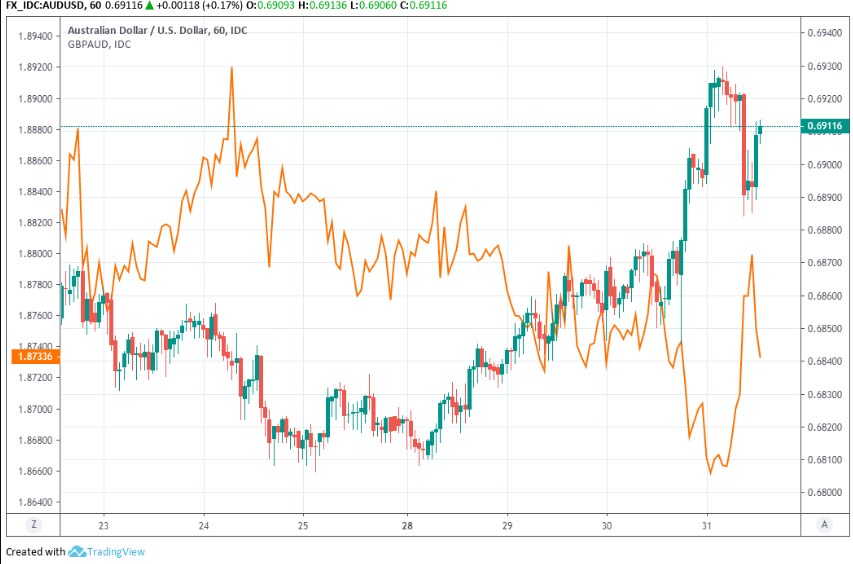 "This is the opposite of recent rhetoric, so either there will be more news on the back of this comment or a repricing in front-end risk reversals in both JPY and AUD options," says Juan Mendoza, an FX derivatives trader at UBS. "AUDUSD risk reversals have barely moved with 1m trading just at 0.5 even though you might expect the same spot-vol correlation as in USDJPY following the China headlines. The market still feels quite long."

AUD/USD was boosted earlier on Thursday by selling of the U.S. Dollar in response to a third 2019 rate cut from the Federal Reserve (Fed), which has been attempting to protect its economy from the disinflationary forces of the nascent global growth slowdown. The cut has left the Fed Funds rate at 1.75% and means U.S. rates are no longer the highest among so-called G10 countries and the Dollar is no longer the highest yielder among major currencies.

Fed rate cuts are helping to ensure the gap between U.S. and Australian interest rates remains constant at levels that, although still disadvantageous to the Aussie, are not getting any worse. However, any renewed trade tensions would cast a fresh cloud of darkness over the global economy and they could be especially bad for the Aussie because of its economy's reliance on commodities as well as its sensitivity to China. 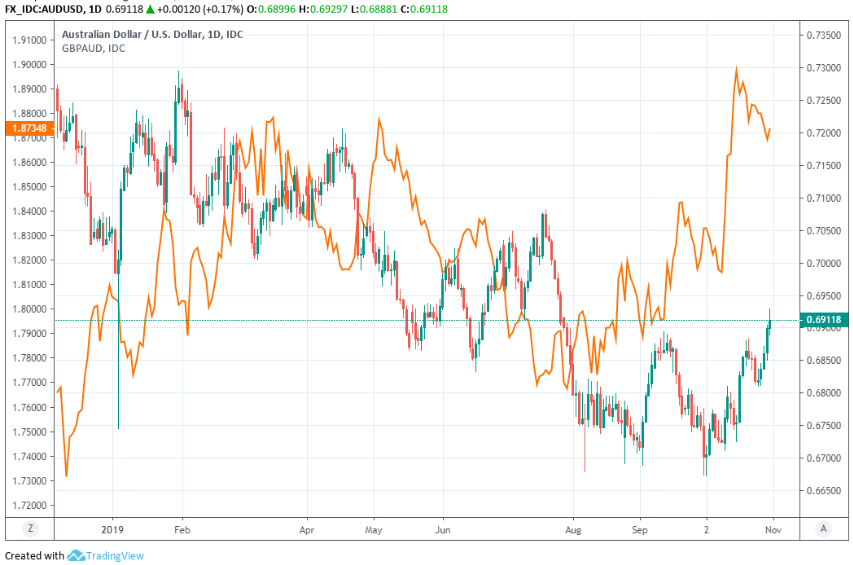 For the time being, the global market tide is showing signs of turning against the U.S. Dollar and the charts, at least, are still pointing to further gains being ahead for the Australian currency relative to its U.S. rival. Pound Sterling, on the other hand, is a different story because the British currency was boosted on Thursday by improving odds among the bookmakers in favour of a Conservative Party victory in the December 12 general election.

That's boosted the Pound because it also improves the odds of the UK both avoiding a 'no deal' Brexit but also moving further along the path toward an agreed future relationship with the EU. For all its flaws, Prime Minister Boris Johnson's exit agreement is seen decisively ending the threat of a 'no deal' Brexit while providing some kind of certainty to businesses about the UK's trade arrangements for at least a couple of years. However, some have pointed out there's a flip side to Thursday's developments.

"The Brexit Party has reportedly opted to run in just 20-30 seats nationwide, rather than hundreds of seats as some had previously speculated. On the face of it, that's good for the Conservatives, as it means there is less chance of the Brexit Party splitting the Leave vote across the UK. The Brexit Party remains as potent as ever, and may only need 10 seats in the House of Commons to be able to hold the balance of power. A future Conservative prime minister may well have to rely on those votes to pass Brexit legislation – and Brexit Party MPs will be intransigent. The Brexit Party will announce its intentions on Friday," says Matthew Cowley, a macro salesperson at UBS.