- AUD struts into the weekend as USD bleeds lower.

The Australian Dollar strutted into the weekend, aided by a strong jobs report and a wounded greenback that was beaten into retreat by a souring Federal Reserve (Fed)interest rate outlook, but analysts say the Reserve Bank of Australia (RBA) will return to haunt the antipodean currency again before long.

Australia's Dollar enjoyed a strong run of gains this week after being aided by both domestic as well as international factors, not least of all a surprise fall in the unemployment rate for the month of September that saw markets bail out of earlier heavy wagers the RBA would cut its interest rate again on November 05.

The market-implied RBA cash rate for that date was 0.70% Friday, up substantially from the 0.64% that prevailed on Wednesday, although still below the current 0.75% level which suggests investors still see some probability of a rate cut next month. This was after the jobless rate fell to 5.2%, although the RBA has hinted that it could keep cutting until it achieves 'full employment'. The bank estimates that will require a jobless rate of 4.5%. 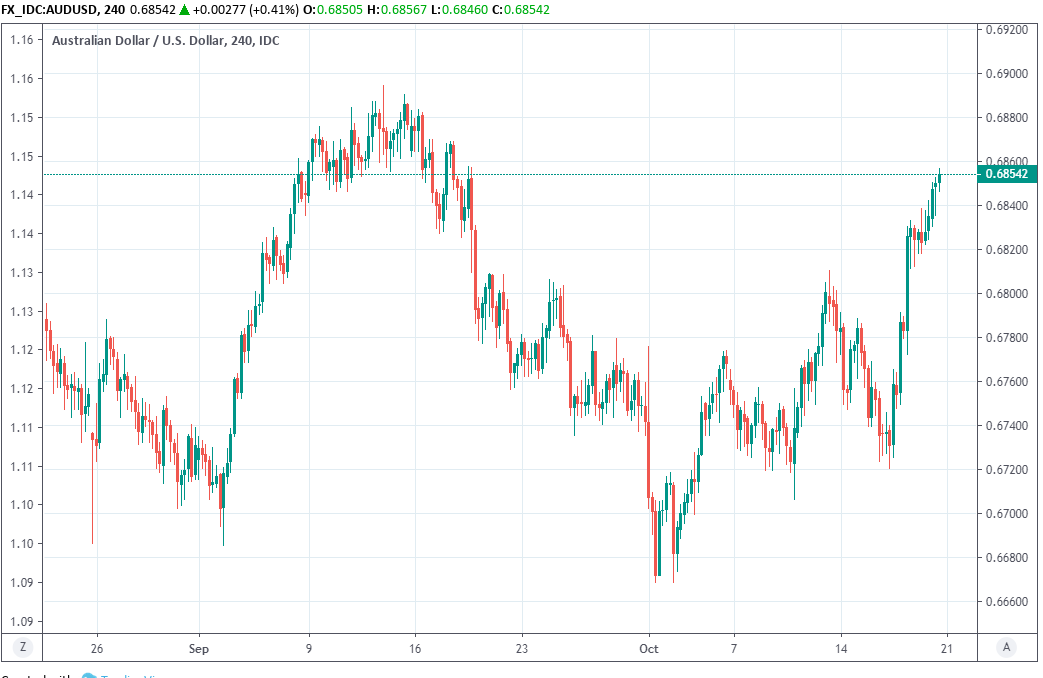 Nomura has changed its RBA forecast in the wake of the jobs report and now tips the bank to cut rates in December instead of next month, although this implies more weakness around the corner for the Aussie because markets are pricing a cash rate of 0.60% for that month but a cut would put it at 0.50%. Rochester also forecasts the RBA will cut its benchmark to 0.25% next year and potentially begin quantitative easing, which would be first for Australia and bad news for the currency.

The RBA has cut its interest rate three times this year, leaving the cash rate at 0.75% in October, as part of an effort to lift growth and inflation. For years the bank had sat patiently waiting for the consumer price index to rise into the 2%-to-3% target band but an economic slowdown that took hold in the middle of 2018 has since forced the RBA into action. The U.S.-China trade war, which has weighed on the global economy, has also been a factor for the RBA.

"With no sense of urgency in RBA communications, a small dip in unemployment and rate cuts becoming more politically contentious, we have pushed back our forecast timing of the next 25bp cut by one month to December. We still see a terminal cash rate of 0.25% next year and attach an approximate 60% probability of unconventional easing too," Rochester says.

Nomura forecasts this kind of rate outlook will mean Australian government bond yields will fall further than those of the U.S. government in the months ahead, which could mean the Aussie is also set to cede more ground to the greenback. The U.S. Dollar was beaten into a retreat this week by a fresh data suggesting trouble is ahead for the economy, leading markets to bet the Fed will soon step up the pace of its rate cuts. 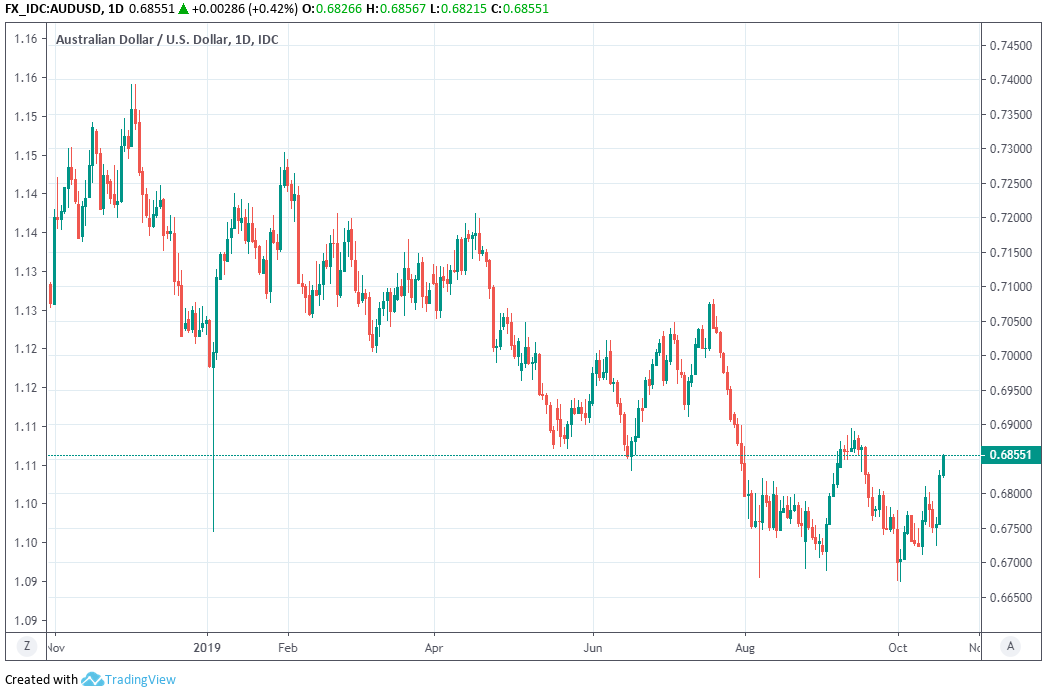 American factories are struggling badly after a year and a half of U.S. trade war with China and economists are increasingly concerned that a downturn in the manufacturing industry could soon spillover into the rest of the economy, leading to slower growth and undermining the outlook for inflation. And markets are betting this is all that's necessary for policymakers to cut the Fed Funds rate to 1.75% on October 30, which would be the third 2019 reduction of interest rates.

"The US dollar is trying to turn lower. The key EURUSD pair has taken out the key 1.1100+ pivot area that was established all the way back in the spring of this year, AUDUSD is breaking above a local pivot and other USD pairs have also pushed to new local extremes against the USD’s favour," says John Hardy, chief FX strategist at Saxo Bank.

Additional factors at play included a Thursday report from Bloomberg News suggesting U.S. and Chinese negotiators will talk on the phone next week about inking the agreement struck between President Donald Trump and Vice Premier Liu He last Friday. Markets are hopeful that a durable ceasefire in the tariff fight can be reached before a November summit, which is something that also helped lift the Aussie throughout the week.

Pricing in the overnight-index-swap market has gone from implying an October 30 Fed Funds rate midpoint of 1.66% to one of 1.63%, with the total implied change rising to -24 basis points, this week. That suggests investors now think the Fed is almost certain to announce a 25 basis point cut at the end of this month, which is a significant deterioration of the general expectation on September 18, the day of the previous decision, when pricing implied that investors saw little chance of a move in October.

"From here, the critical support factor for a proper turn lower in the US dollar is assurance that the Powell Fed will continue to provide easing at every turn and at least stay on top of the curve if not get ahead of it in providing further easing in the form of rate cuts and balance sheet expansion," Hardy says.