Australia's Dollar slumped into the Tuesday session after the Reserve Bank of Australia (RBA) suggested strongly that an interest rate cut is now imminent, which has helped to put a floor under the Pound-to-Australian-Dollar rate following a week of steep losses.

Australia's Dollar was under pressure again Tuesday after the release of minutes from the May interest rate meeting and in the wake of a keynote speech at a business luncheon in Brisbane by Governor Philip Lowe.

Lowe told his audience the RBA recently considered what it could do if a further improvement in the labour market fails to materialise during the months ahead, and said the board judged that this would likely demand a rate cut.

"A lower cash rate would support employment growth and bring forward the time when inflation is consistent with the target. Given this assessment, at our meeting in two weeks' time, we will consider the case for lower interest rates," Lowe told luncheon guests.

This came right after minutes from the May policy meeting showed RBA board members fretting about a scenario where unemployment trended higher this year but inflation did not move into the 2%-to-3% target band.

The board agreed that this would require a rate cut, which they say would stimulate the economy by forcing Aussie exchange rates lower and reducing existing borrowing costs for households and businesses.

Australian unemployment jumped 20 basis points to 5.2% in April after rising by 10 basis points back in February, while inflation surprised on the downside in the first-quarter and wage growth also disappointed the market.

"Our AU economists have accordingly brought forward the August and November rate cuts they have had in the profile since April, to June and August," says Sue Trinh, head of Asia FX strategy at RBC Capital Markets.

Interest rate decisions are normally made in relation to the outlook for inflation but have influence over international capital flows, which tend to move in the direction of the most advantageous or improving relative-returns.

Higher rates tend to draw flows toward a currency whereas a threat of lower rates can see investors driven out of and deterred away from a currency. 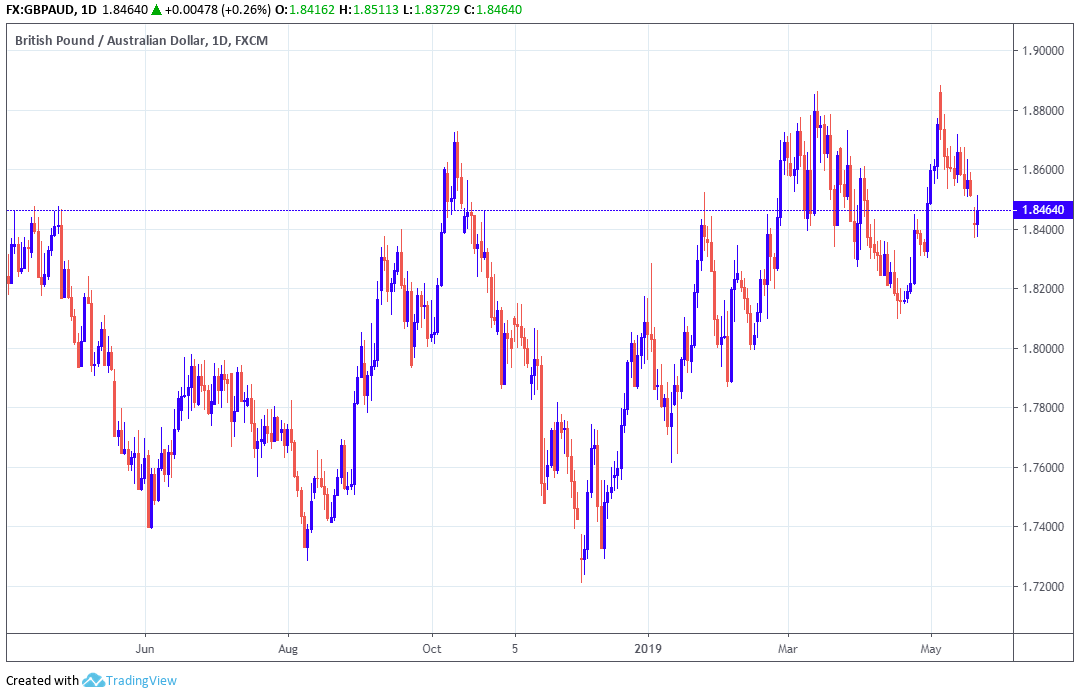 "With Governor Lowe emphasizing the possibility of a rate cut in June, latest euphoria should be well and truly over. The AUD is fighting a losing battle these days," says Marc-Andre Fongern at MAF Global Forex. "The Australian dollar should be sold on strength since the U.S. and China intensified their conflict, which is the major mood killer for Australia's economy."

The Australian Dollar ceded ground to all of its developed world rivals overnight and during the morning session Tuesday. 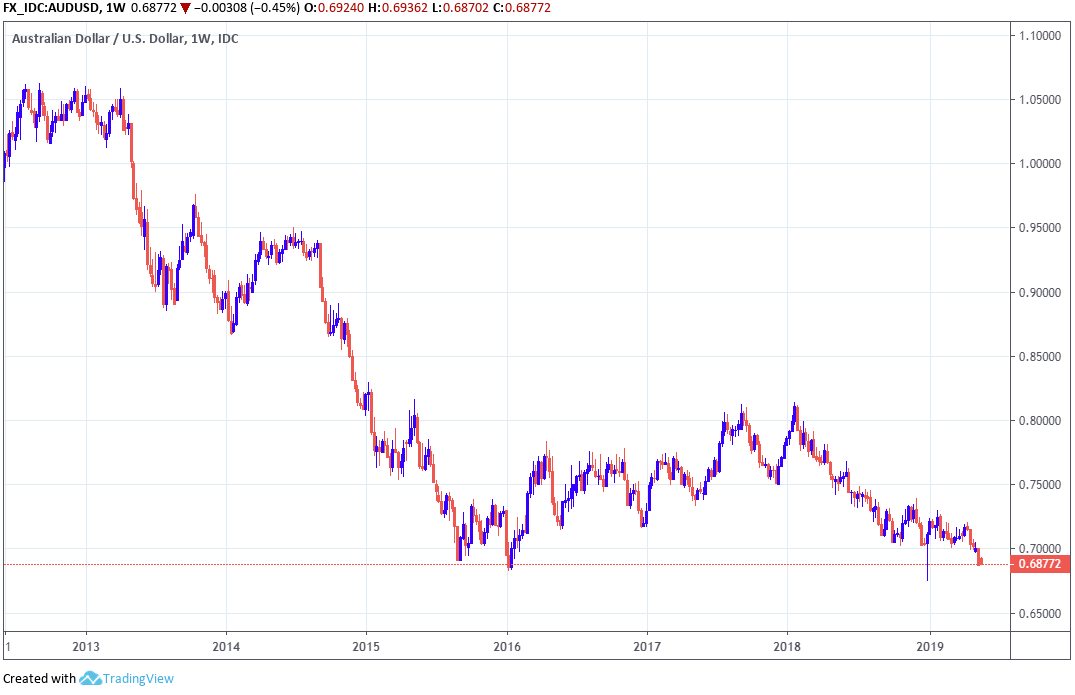 "We are announcing an adjustment to the forecast to bring forward the first cut to the June Board meeting with the second cut to follow in August. We then expect the cash rate to remain on hold through 2020," says Bill Evans, chief economist at Westpac.

Tuesday's price action comes amid a wave of forecast changes, with many economist now predicting the RBA will cut rates in June and again in August.

The market has moved in that direction too, with overnight-index-swap rates now implying a cash rate of just 1.26% on June 04, which is far below the current 1.5% rate.

The implied rate for August is now just 1.09%, close to the 1% that would prevail following a second rate cut. Both numbers are down significantly since Monday, explaining the fall in the Aussie.

"It is inevitable that the global economic trends experienced in many countries, of sustained low inflation and record low unemployment rates, are also experienced here in Australia because Australia is a small open economy," says Kim Mundy, a strategist at Commonwealth Bank of Australia.

The RBA has been battling against below-target inflation for a number of years now and began warning in February that interest rates could go either up or down in their next change, when before the bank had guided markets to anticipate a rate hike at the next change.

Cutting borrowing costs is one way to encourage the faster economic growth that is necessary for the unemployment rate to come down further, which is seen as a prerequisite for the kind of wage growth and inflation that would lift the consumer price index into the 2%-to-3% target band.

"Weaker than expected inflation and the recent pick up in in the unemployment rate has strengthened the case for an imminent rate cut. The Australian rate market has shifted to price in an even higher probability of a June rate cut and further cut later this year. In these circumstances, the Aussie should remain under downward pressure. The next key support level is provided by the January “flash crash” low of 0.6741," says Lee Hardman at MUFG.