- Next week's inflation data will be key to the RBA and AUD outlooks.

The Australian Dollar was still fighting in the wake of a strong March jobs report Thursday, to overcome a technical level that is key to further gains for the currency, which means price action into the Easter holiday weekend could prove significant to the outlook for the Antipodean unit.

That March increase came after the economy traded -22.6 part-time roles for 48.3k new full-time jobs, although none of this was enough to prevent the unemployment rate from rising by 10 basis points to 5% in-line with the market consensus.

"This report will be strong enough to keep the RBA smug and sitting on their hands for long enough that it will take a more aggressive rates move too late in the game for them to be able to make a difference," says Michael Every, a strategist at Rabobank.

The Reserve Bank of Australia (RBA) has highlighted the labour market as being crucial to its interest rate outlook, with a "sustained increase" in the unemployment rate likely enough to trigger a rate cut.

Thursday's data showed the economy still creating jobs at a healthy clip, which reduces the likelihood of such an increase in joblessness and explains why the Australian Dollar was able to advance by a fraction on many of its rivals during the overnight session. 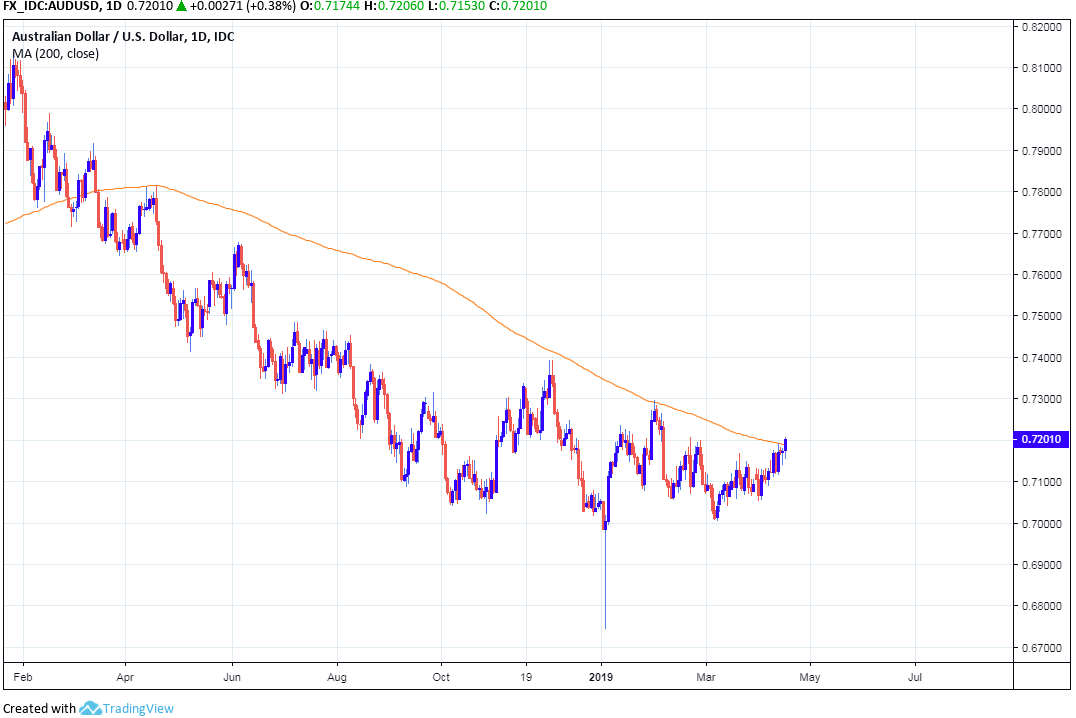 Above: AUD/USD rate shown at hourly intervals, with 200-day average in orange.

Australia's Dollar crossed over its 200-day moving average for the first time in 12-months Wednesday after China's economy was cast in a resilient light in the first quarter and it made another journey across the Rubicon in the wake of the unemployment figures,.

This is significant for the Antipodean outlook given that the 0.7191 area has previously acted as a tough resistance barrier to the market. Technical analysts are now watching the AUD/USD rate closely because its closing level on Thursday will be significant to future direction.

The move higher by the Aussie corresponded with a further slip in the Pound-to-Australian-Dollar rate, which is now close to having returned to its 2019 starting level after falling persistently since the middle of March.

Without a matching upturn in the GBP/USD rate, the Pound-to-Aussie rate can be expected to continue falling as the AUD/USD pair advances. However, whether or not the latter exchange rate does go on recovering previously lost ground is another question.

"AUD/USD has eroded the 200 day ma at .7190. The market faces tough resistance in this vicinity, namely .7207 (end of February high) and this may take several attempts to crack. Above here targets initially the 55 week ma at .7282. It stays bid above the .7109 uptrend. Price action in January was exhaustive – the market charted a hammer (reversal). This suggests the down move ended at .6738," says Karen Jones, a technical analyst at Commerzbank. 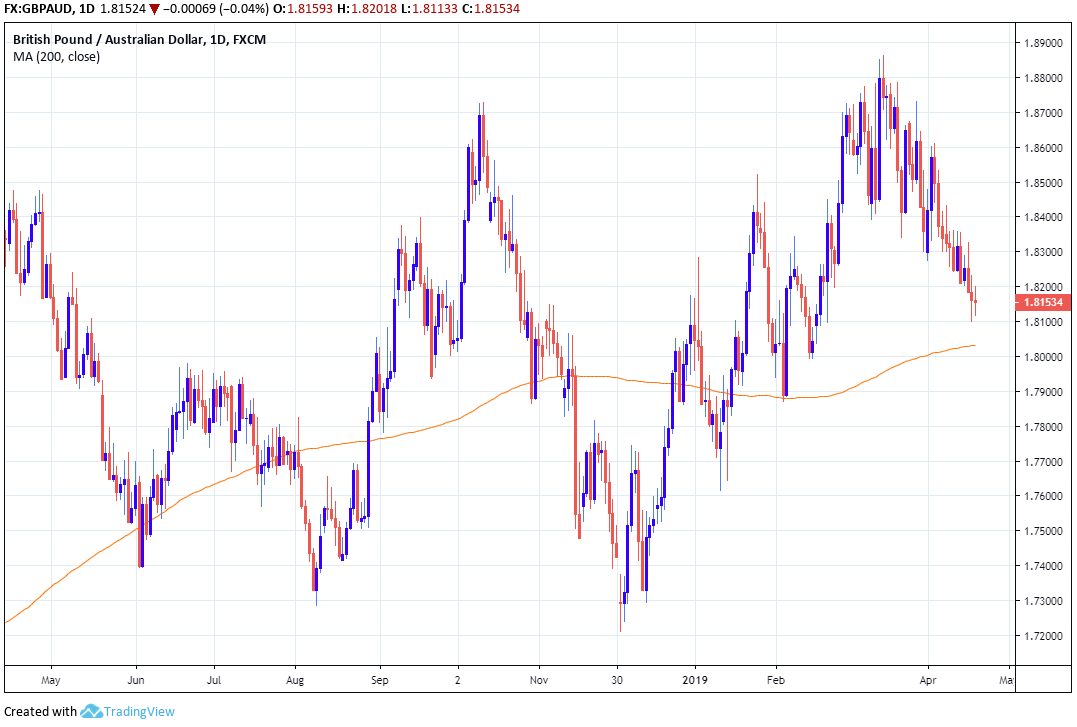 Above: Pound-to-Aussie rate shown at daily intervals, with 200-day average in orange.

The RBA said this week that further falls in inflation and a sustained increase in joblessness would be enough to bring about the interest rate cuts that financial markets have bet increasingly in favour of during recent months. The comments came barely more than a week ahead of the first-quarter inflation numbers.

With the consumer price index stuck below the 2% lower bound of the 2%-to-3% target, the RBA has been attempting to encourage a pick-up in these underwhelming inflation pressures for a number of years now and to that end, the cash rate has been at a record low of 1.5% since mid-2016.

Rate setters need either faster wage growth for households, which requires more jobs and lower unemployment, or they need faster economic growth in order to get the consumer price index back into the target band.

"The build-up to the May RBA meeting will reach a crescendo in the coming weeks as the CPI looms large. With our expectation of a +0.4% we think that the case for a RBA cut remains thin, However, there will be little tolerance for any weakness, and we think that a core print in the realms of a +0.2% q/q could trigger an easing from the RBA," says Rahul Kahare, an economist ANZ.

Without an improvement in the inflation outlook interest cuts from the RBA are just a matter of time. Pricing in the derivatives market implies an RBA cash rate of 1.16% by year-end, suggesting investors see a very high probability of not only one, but two RBA rate cuts being delivered in 2019.