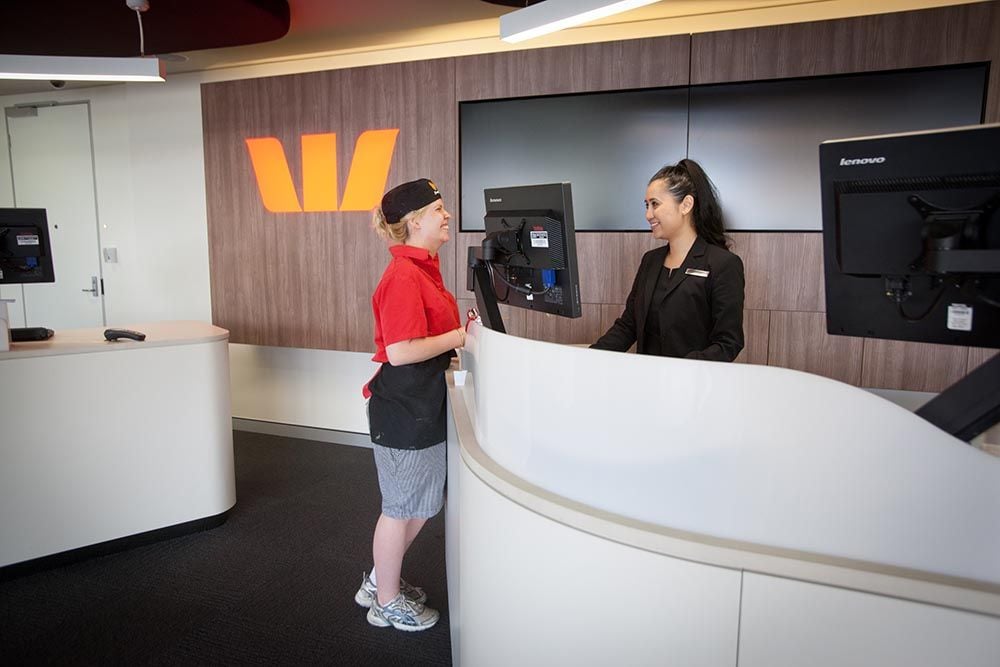 - AUD to see losses against GBP and USD in 2019 says Westpac.

Australia's Dollar is likely to see steep losses later in the year that are expected to drive the Pound-to-Australian-Dollar rate up to a post-referendum high, despite the ongoing Brexit farce in the UK parliament, according to the latest forecasts from Westpac.

Westpac, one of Australia's four largest lenders by assets, says the Aussie will be hobbled later this year by interest rate cuts from the Reserve Bank of Australia (RBA). Meanwhile, and despite a likely protracted period of uncertainty about the UK's relationship with the EU, a resilient Sterling is expected to help the Pound-to-Aussie rate.

Those forecasts came just before the European Council granted Prime Minister Theresa May an extension of the Article 50 negotiating window in order for the embattled and increasingly isolated head of government to force her withdrawal proposal through parliament or come up with an alternative idea in cahoots with opposition MPs.

"Two weeks after the UK was scheduled to leave the European Union, the Brexit process remains unresolved," says Richard Franulovich, head of currency strategy at Westpac. "Given the political hurdles that need to be cleared, we cannot rule out an eventual no-deal Brexit. We could also see a snap election or a second referendum. As this plays out, the ongoing economic uncertainty continues to be a significant drag on economic conditions."

Franulovich and the Westpac team say the UK and Eurozone economies are likely to grow by just 1.2% in 2019, marking another deceleration from the rates of growth seen in the previous year, with much of the weakness coming from the manufacturing sectors of both.

This means the Pound and Euro will struggle against the Dollar this year because, despite that the U.S. economy is also expected to slow, the Federal Reserve (Fed) interest rate of 2.5% is still far higher than the 0% rate of the European Central Bank and 0.75% rate of the Bank of England.

Franulovich projects almost no gain for Sterling over the U.S. Dollar this year and another loss for the Euro, but both currencies are forecast to rise against the beleaguered Australian Dollar, which is expected to suffer even further this year given a deteriorating outlook for Reserve Bank of Australia policy.

Above: Westpac forecasts for the UK and European economies.

"The Australian economy lost considerable momentum in 2018, growth slowing from a 4% pace in the fi rst half to a 1% pace in the second," Franulovich writes, in Westpac's latest monthly review of currency markets. "Westpac expects economic growth to remain at a subdued 2.2% pace throughout 2019 and 2020, well below Australia’s ‘trend’ or potential growth, thought to be around 2.75%yr."

The Australian Dollar fell by around 8% in 2018 due to a range of domestic and international factors, although the slowdown in the economy was a purely domestic phenomenon that resulted from a faltering housing market and the impact it's having on consumers.

House price falls and their economic impact has prompted the RBA to shift from a so-called tightening bias as far as its interest rate policy goes, to a more neutral stance and there has since been speculation that it could soon move to an outright easing bias. That would see the bank warning of imminent interest rate cuts.

Markets have been betting since late 2018 that the RBA will cut its cash rate to a new record low sooner or later, although those bets have become more pronounced this year given the February shift by the RBA to a more neutral interest rate stance. 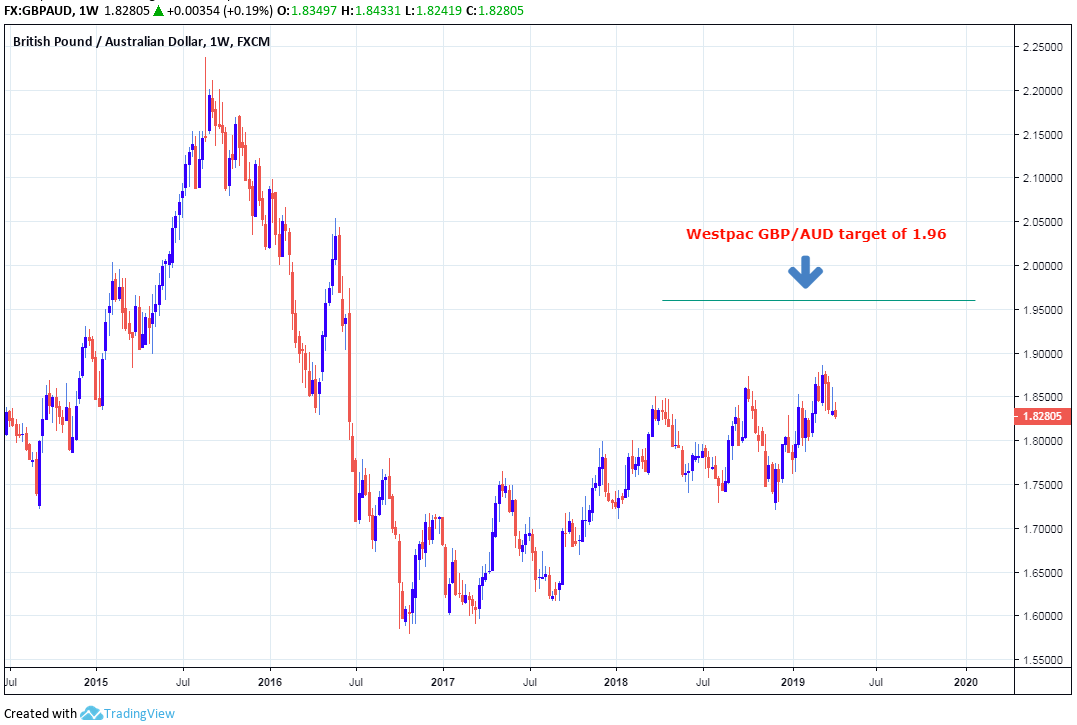 Above: Pound-to-Australian-Dollar rate shown at weekly intervals, with Westpac 2019 target.

"The Board is likely to adopt a formal easing bias at its May meeting. Our thinking here is that the Statement on Monetary Policy for May will include a downward revision of the Bank’s growth forecasts. There is some further support for this view in the April decision statement which excludes comments on the RBA’s current growth forecasts," Franulovich says.

The market-implied cash rate for December 2019 has fallen to just 1.13% during recent weeks, down from 1.38% in early January, both of which are far below the current cash rate of 1.5%. All major Australian banks except Commonwealth Bank of Australia now forecast interest rate cuts for 2019.

Commonwealth Bank says $3.5 billion of tax cuts announced in the April budget are equivalent to one rate cut and should help ease pressure on the RBA, but Westpac says that stimulus will not be enough to prevent the economy slowing.

"We expect the consumer to be very cautious with tax-related boosts, with a relatively low spending rate limiting the impact on the economy," Franulovich writes. "Westpac sees fiscal policy as having only a modest impact on the outlook and continues to expect cash rate cuts in August and November delivered to cushion the economy against a slowdown in 2019." 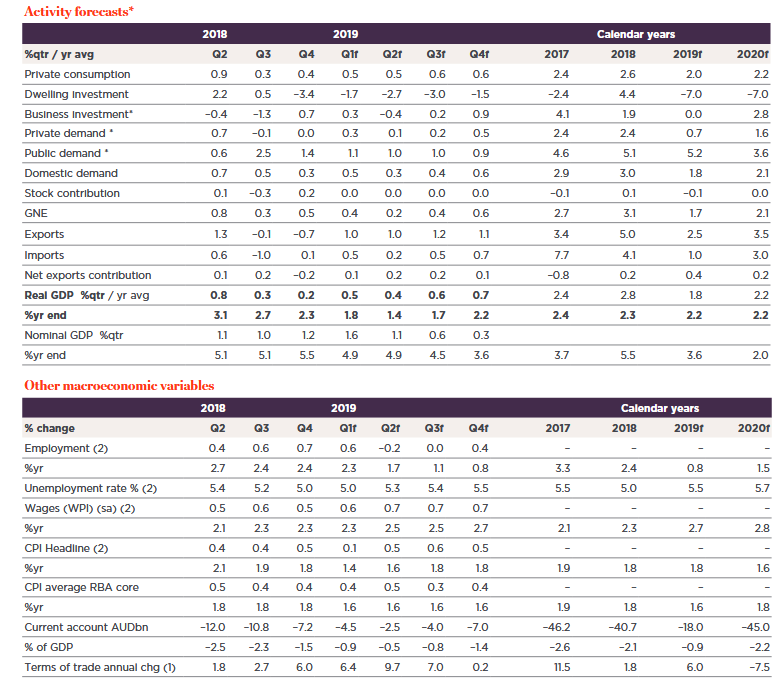 Above: Westpac forecasts for the Australian economy.

For its part, the RBA has made its next move on rates highly contingent on developments in the jobs market. It says that if unemployment were to see a sustained increase then the bank would be likely to cut interest rates.

This is because if unemployment rises, the RBA will have even less chance of ever seeing the wage growth that is says is necessary to help sustainably lift the economy, which is a precondition for returning the consumer price index above the lower end of the 2%-to-3% target band.

Westpac forecasts the Australian unemployment rate will rise from 4.9% in February 2019 to 5.5% by year-end, even with two RBA interest rate cuts being delivered in the intervening period. If correct, that unemployment forecast will seal the deal for an RBA rate cut before long.

Franulovich and the Westpac team say this is part of what will drive the Australian Dollar down to a multi-year low against its U.S. rival in 2019, and the Pound-to-Austrlain-Dollar rate to a post-referendum high even in the face of prolonged uncertainty about the UK's exit from the EU.

The Pound-to-Australian-Dollar rate is forecast to rise from 1.82 Thursday to 1.96 before year-end, it's highest level since the days immediately before the Brexit referendum of June 23, 2016. The AUD/USD rate, meanwhile, is projected to fall from 0.7160 on Wednesday to 0.68 in time for year-end. 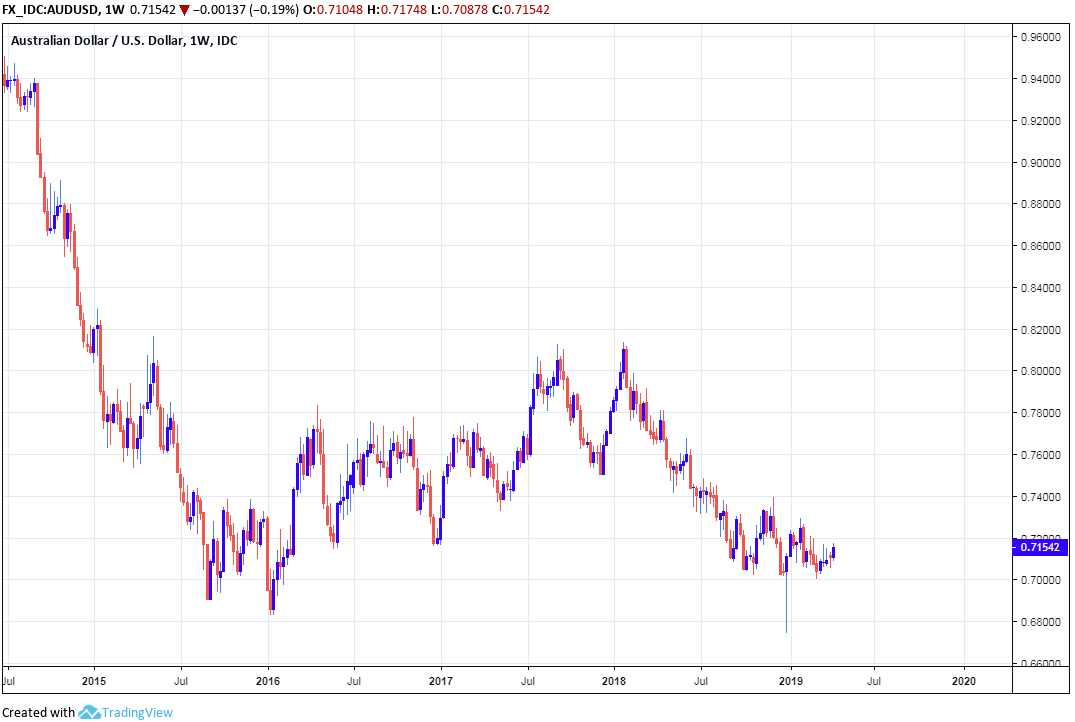