The Aussie Dollar is being supported by rising commodity prices because the 'terms of trade' have usurped interest rates as the dominant driver of G10 exchange rates, according to Bank of America, although this has also left the Antipodean currency teetering on a precipice.

Iron ore, liquefied natural gas and aluminium prices all rose during the 12 months to the end of March according to the Reserve Bank of Australia (RBA) index of commodity prices, which has risen 16.6% during the last year in Australian Dollar terms. This is important for the Australian terms of trade.

The terms of trade are a measurement of export prices relative to import prices. When prices of export goods rise faster than those of import goods, the purchasing power and value of a currency is improved and vice versa.

New research from Bank of America suggests the "terms of trade" of G10 economies are fast becoming the pre-eminent driver of exchange rates in the developed world which, when taken together with improved prices for export commodities, explains the Aussie's resilient performance in 2019.

"Our Chart of the Day shows the evolution of statistically significant factor differentials across USD-based G10 FX pairs since the global financial crisis," says Ben Randol, a strategist at Bank of America."While there are exceptions for some pairs, terms of trade has emerged as the last factor standing in the aggregate. Monetary policy-related factors have fallen out of significance." 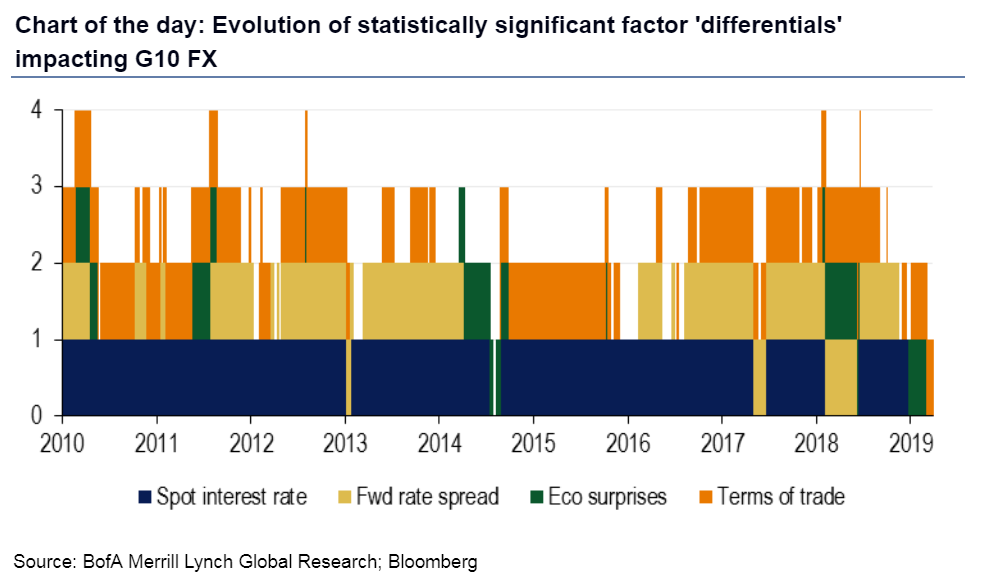 The Australian Dollar has risen by 1.3% against the U.S. Dollar in 2019 and has also notched up gains over every other G10 currency except for the Canadian Dollar and Pound Sterling. That's after falling by around -8% in 2018.

That performance appears all the more striking after taking into account the deterioration in the Reserve Bank of Australia rate outlook this year, which has seen markets go from flirting with the idea of one RBA cut for 2019, to betting outright that the bank cuts rates twice before the year is out.

The market-implied RBA cash rate for December 2019 was 1.38% on January 07, beneath the current 1.5% rate, which suggested around a 50% probability of a cut before year-end. On Tuesday that implied rate was just 1.14%.

Current implied cash rates suggest markets are now certain the RBA will cut rates once in 2019 and that they are also confident of a second rate cut being delivered. That should have put the Australian Dollar under huge downward pressure this year, given capital tends to flow in the direction of more advantageous returns, but it hasn't.

"We suspect this is largely reflective of global event risks, and in particular increasing proximity to well-flagged US-China trade and Brexit deadlines. Effectively, these event risks have helped drive a wedge between spot exchange rates and interest-rate differentials on a spot and forward spread basis. Event risks clearly contributed to significant financial market turbulence around the turn of the year," says Randol. 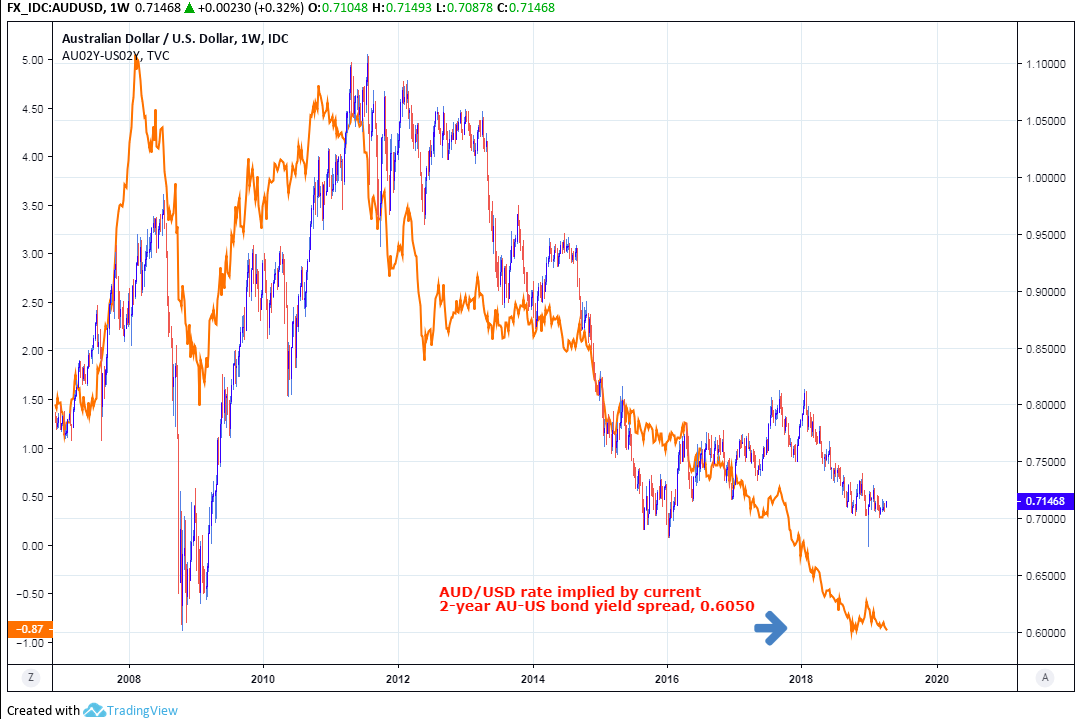 There is an unprecedented cloud of uncertainty hanging over the global economy this year, given the after-effects of President Donald Trump's trade war with China and the UK's pending exit from the European Union. A trade skirmish between the U.S. and EU could also now potentially be in the pipeline.

This has already hurt economic growth in Europe as well as forced the Federal Reserve to abandon earlier plans for further interest rate hikes this year, leaving investors paralysed by uncertainty over the outlook for interest rates in the world's major economies.

And now, with investors unable to confidently bet on the trajectory of bond and interest rate differentials, they've begun to follow movements in the terms of trade. However, this has seen some currencies supported by the market when under normal conditions they might have slipped substantially lower.

This is especially the case for the Australian Dollar, which might be trading close to the 0.60 level against the U.S. Dollar in an interest rate driven market, rather than the 0.71 level it was at Tuesday. The Pound-to-Australian-Dollar rate might be trading comfortably above the two-for-one threshold in that environment. 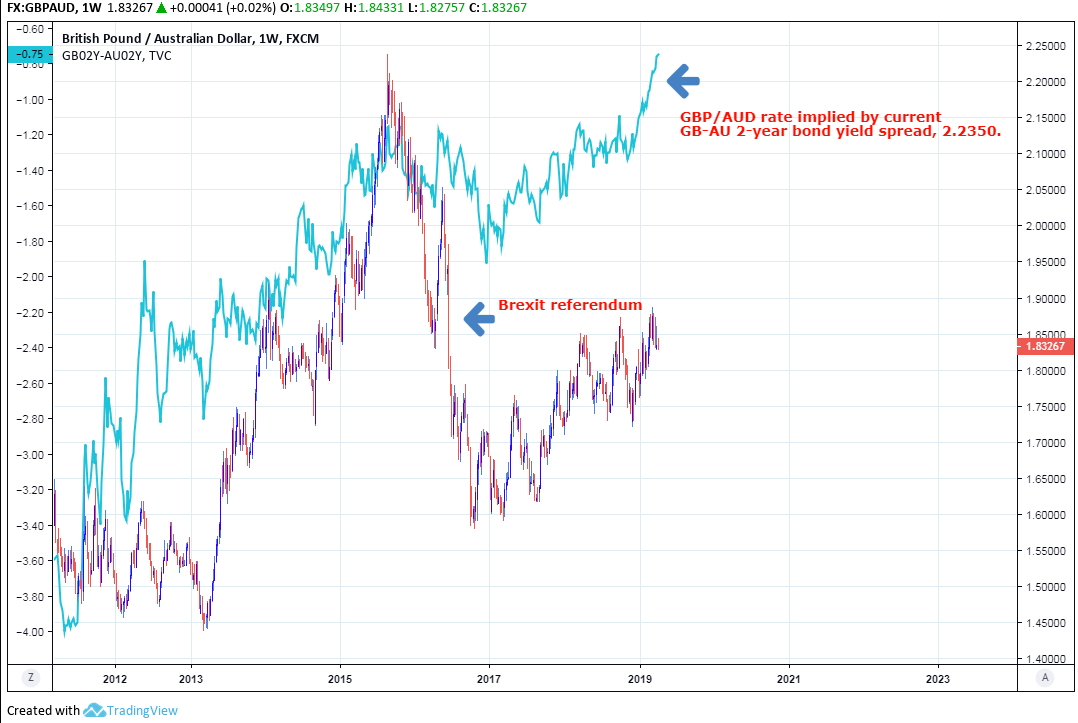 The danger for the Aussie now is, if something were to happen that leads markets to refocus on interest rate differentials rather than the terms of trade or any other driver of exchange rates, it could suffer steep and punishing losses because investors appear not have priced in much, if any, of the recent deterioration in the RBA outlook.

"It is an atypical situation, particularly insofar as traditionallyimportant monetary policy factors have fallen out of significance.We think that this is symptomatic of heightened market sensitivity to global event risks. Ultimately,we expect reassertion of monetary policy-related factors when risks deescalate," Randol writes, in a note to clients.