- Pound to be driven by Brexit; Aussie by China news

Of late Pound Sterling and the Australian Dollar have been two of the best-performing major currencies in global FX markets: it is therefore little wonder that the GBP/AUD exchange rate reflects something of a deadlock.

As such, the GBP/AUD exchange rate is trading at 1.8338 at the start of the new week, little changed from the week before.

Sterling has exhibited strength on the back of the news that Theresa May was reaching out to Jeremy Corbyn in order to try to forge a consensus on Brexit that could actually result in a deal that a majority in the House of Commons might support.

The Australian Dollar has meanwhile benefited from a robust recovery in global investor sentiment, with markets being particularly optimistic that a trade deal between the U.S. and China is nigh.

We therefore watch progress in Brexit and global investor sentiment when considering GBP/AUD over coming days.

Despite the deadlock in GBP/AUD, our technical analysis of the pair is actually rather bearish. 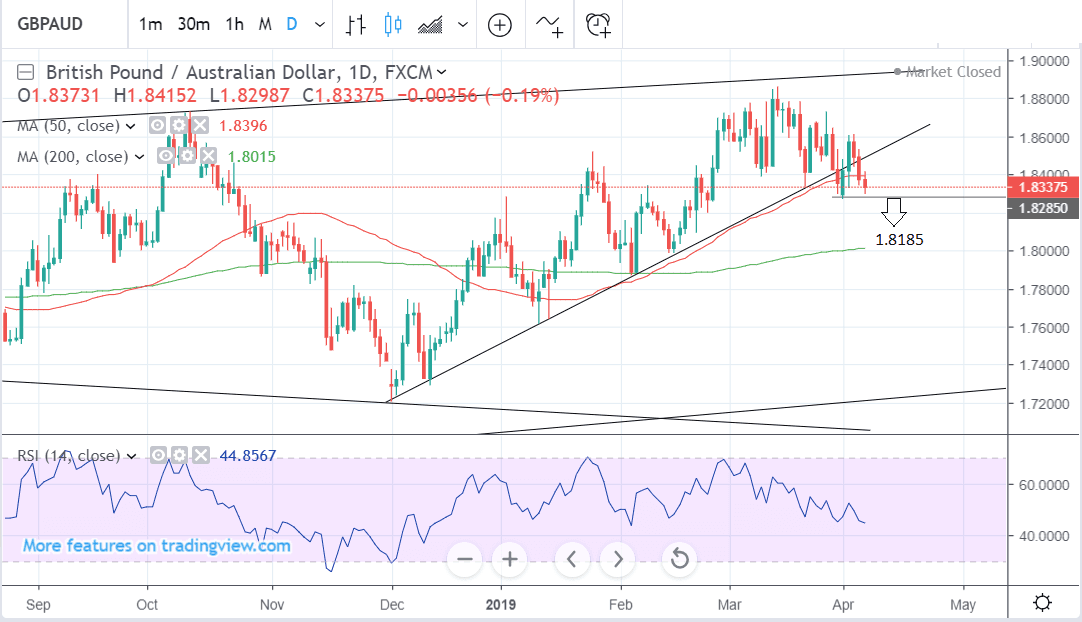 The pair has now broken below a trendline drawn from the late 2016 lows and a break below the 1.8273 lows would probably signal an extension lower, to an initial target at 1.8185 where the 200-week moving average (MA) is situated and likely to supply support.

Momentum is in steep decline and supports the bearish outlook. 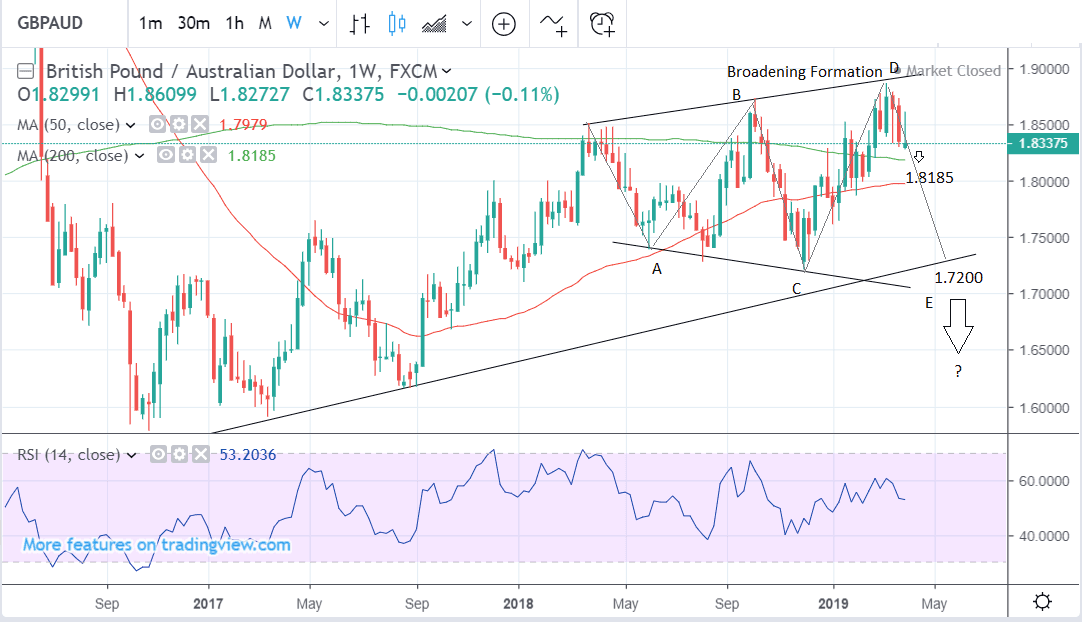 The bearish forecast coming from the trendline break is further supported by the evolution of a ‘broadening formation’ (BF) or ‘loudspeaker’ pattern, which is generally a bearish indicator.

BF’s are usually composed of 5 waves, labelled A-E. The pattern forming on GBP/AUD appears to have completed 4 waves so far. This suggests the next wave could be a wave E down. Such a move could take the pair all the way down to the border line at around 1.7200. 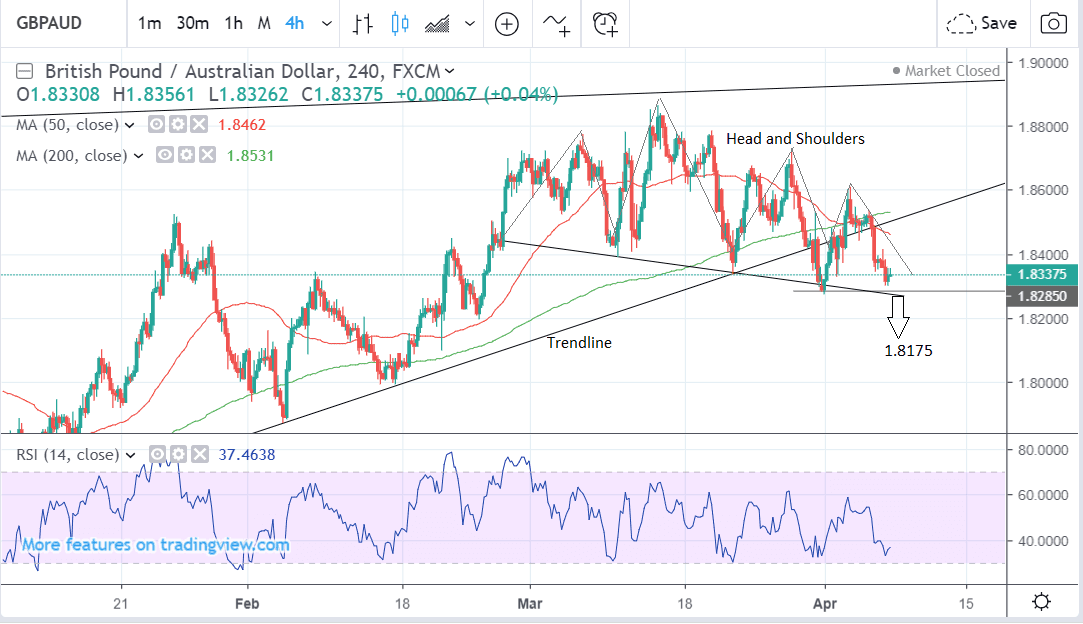 Last week we discussed the head and shoulders topping pattern which was forming at the highs.

This is a very bearish pattern, and even more so not the exchange rate has already broken below the neckline at 1.8290 level, which is the confirmation level. It should now continue falling; the next downside target is at the aforementioned 200-week MA at 1.8175.

The main factor moving the Australian Dollar in the coming week is likely to be news concerning China - its largest trade neighbour - rather than anything domestic.

The chances of a breakthrough in trade talks between the U.S. and China are growing with each day. Such an outcome would give a strong lift to the Aussie and would dovetail elegantly with the bearish technical outlook for the pair.

We continue to watch for comment on the matter from senior U.S. and Chinese officials.

For both superpowers the upsides of doing a deal heavily outweigh the downsides of a 'cold' trade war.

China has already experienced the consequences of tariffs in its worsening trade figures. The approaching presidential elections in the U.S. are an incentive for Trump to do a deal, since the Chinese have cleverly targeted his voter heartlands with their tariffs.

“We still believe it is more a matter of when than if we will see a trade deal. The timing is uncertain but, judging from Trump’s comments, we will have to wait another month or so for an announcement of a summit after the deal is done. One of the outstanding points is how many of the US tariffs will be lifted immediately and how many will stay on for some time,” says Allan Von Mehran, chief analyst at Danske Bank.

Chinese trade data is also likely to be the key release in the week ahead for the Australian Dollar. Exports fell a massive -20.7% in February as U.S. tariffs bit and although the decline was partly put down to the timing of the Lunar new year festivities, it couldn't explain the whole extent of such a big fall.

Partly as a result of the decline in February, exports in March are expected to post a recovery of 7.3% when they are released at 4.00 BST on Friday.

Imports are expected to continue to decline, although at a slower -1.3% compared to the - 5.2% of the previous month.

This will provide further information on the likely trajectory of interest rates in Australia. Currently analysts are split with some seeing a neutral outlook and others still dovish and seeing the chance of rate cuts. Since currencies are generally positively correlated to rates this is important.

Other domestic data includes Westpac consumer and business sentiment data is out on Wednesday morning at 13.30.

Tuesday also sees home loans data in February, which is forecast to show a -2.0% fall from -2.6% previously and investment lending for homes also for February at the same time, at 2.30.

The Pound was supported ahead of the weekend on reports European Council President Donald Tusk will this week propose to European leaders they offer the UK a 12-month "flexible" Brexit delay.

However, on Friday Prime Minister Theresa May formally requested a delay to June 30.

If the European Council meeting on Wednesday does grant either of the two requests we expect Sterling to be supported as it ensures the UK will avoid a 'no deal' Brexit on Friday.

There are however reports France, Belgium and Spain see too much danger to the EU's integrity in offering a long extension, and the three countries are reportedly keen to only offer a short, two week extension that would allow both sides to prepare for a 'no deal'.

When we read this report on Friday night we immediately Tweeted a message to our readers that this is a significantly negative development that means the chance of a 'no deal' Brexit is substantial.

Remember, all 27 EU states have to sign off on whatever deal is offered to the UK and such opposition by core EU members cannot be ignored.

Germany is however reportedly open to Tusk's offer of a flexible extension as they are said to be keen to avoid a 'no deal' at all costs.

We feel that if France, Belgium and Spain win out, the UK parliament will face a crunch vote on Thursday that provides MPs a final chance to approve a deal.

The opportunity for parliament to vote for a delay to Brexit will have been entirely removed by the EU.

Much will of course depend on whether Labour and the Conservatives strike a deal that both parties can support in the House of Commons, if they do and a deal is voted through then we would expect a sharp rally in Sterling.

However, we note entrenched opposition within both the Labour and Conservative parliamentary parties against the two sides working for a deal, so even if a plan is agreed there is no guarantee it would be passed by a rebellious parliament.

On the 'hard data' front, the monthly GDP figure for February is the most important release. Currently no rise - or 0.0% - is forecast, which would mean a significant slowdown from the previous month’s 0.7%.

A slowdown in GDP would likely lead to downwards pressure for the Pound since it would make the UK less attractive to outside investors as a destination to put their capital to work.

GDP is out at 9.30 BST on Wednesday. The year-on-year figure is expected to come out at a higher 1.6%, revealing a better longer-term trend. The 3-month change figure is forecast to show a 0.2% rise, the same as previously.

The other key release is industrial production, out at the same time, and expected to show a -0.1% drop in February, versus the 0.6% rise in the previous month. This is an important contributor to GDP, so the release is also significant for the Pound for the same reasons.

The trade balance is also out at the same time. It showed a -£13.1bn deficit in the previous month of February and this is expected to fall marginally to -£12.8bn in February. Currencies often react to big changes in the trade balance as the market adjusts to a new equilibrium so a better-than-expected recovery might help Sterling and vice-versa for a fall.

Other data releases out at the same time are manufacturing production and construction output which is forecast to show a 0.8% rise, both in February.