The Australian Dollar is looking to cement a week of gains with a strong bid being enjoyed by the antipodean currency on further signs of progress on U.S.-China trade relations.

"This is an epic deal, historic - if it happens," Trump said in the Whitehouse ahead of a meeting with Chinese Vice Premier Liu He.

Trump said the U.S. and China had agreed on "a lot of the most difficult points" but that "we have some ways to go".

Stock markets, commodity prices and 'risk-on' currencies such as the Australian Dollar tend to benefit on signs of progress in U.S.-China trade relations.

The first impulse came from Chinese President Xi, who pointed to "substantial progress" in trade talks with the U.S. and called for an early conclusion of a bilateral deal.

"Risk sentiment has held up relatively well in recent sessions, as reports overnight suggest that the US and China are moving closer to reaching a trade agreement," says Robin Wilkin a market strategist with Lloyds Bank.

Wilkin adds the Australian Dollar has been a "standout performer, which is often the case in such risk positive moves."

The Pound-to-Australian Dollar exchange rate was however more static, which is understandable considering Sterling is currently the week's best-performing currency.

If we look a the GBP/AUD chart we see near-term the advantage certainly lies with the Aussie however, and there is a risk that the longer-term 2019 uptrend is now eroding. 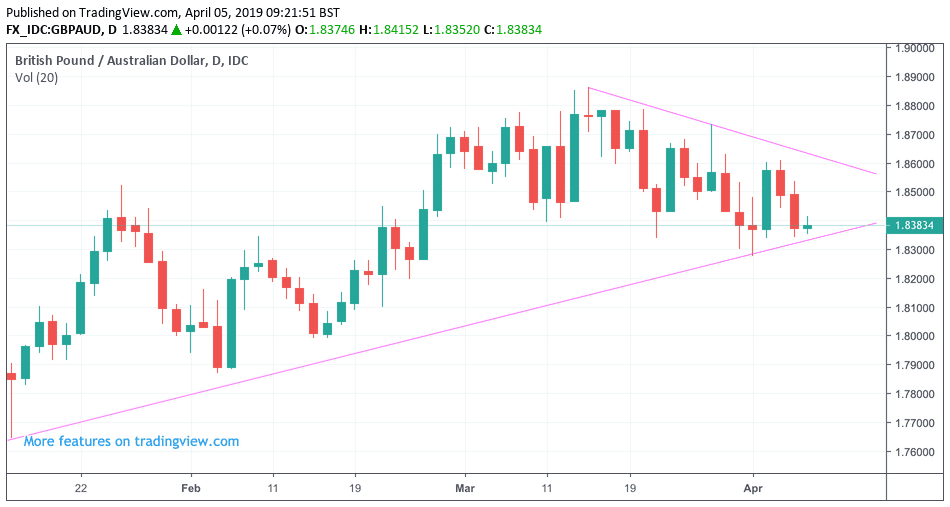 More good news on global markets will only add to the Aussie's strength we believe, and are wary of Sterling losing more ground, particularly should the Brexit environment sour in what promises to be a critical week for the Pound.

The Australian Dollar is also benefiting from an improvement in domestic data, with retail sales and its trade surplus beating market expectations earlier this week.

The prospects of an interest rate cut at the Reserve Bank of Australia have understandably faded as a result, which and should the trend continue we would expect further support to be enjoyed by the Aussie.