- After being dented by RBA's hint of a shift to an easing bias.

The Aussie was higher across the board Wednesday, and the Pound-to-Australian-Dollar rate lower, after a deluge of positive economic figures forced investors to retreat from earlier bets against the Antipodean currency.

Strong economic figures from both Australia and China took the market by surprise overnight, helping to lift the Aussie barely a day after it was left reeling by a Reserve Bank of Australia (RBA) policy statement hinting at a possible shift to a so-called easing bias over the coming months.

Australian retail sales rose by 0.8% during February, up from 0.1% previously, when markets had looked for growth of just 0.3%. That was the fastest increase in Aussie consumer spending since late 2017.

Household goods retailing and department stores both saw sales fall again during the recent month, although all other subsectors saw some form of growth, with food retailers and cafes leading the pack.

"AUD/USD lifted higher in the Asian session and is trading back around its pre‑RBA level at 0.7100.  Stronger than expected Australian February retail sales and a record monthly Australian February trade surplus generated a 0.7% lift in AUD/USD," says Richard Grace, head of FX strategy at Commonwealth Bank of Australia. "Australia is receiving a large income boost from the resources sector." 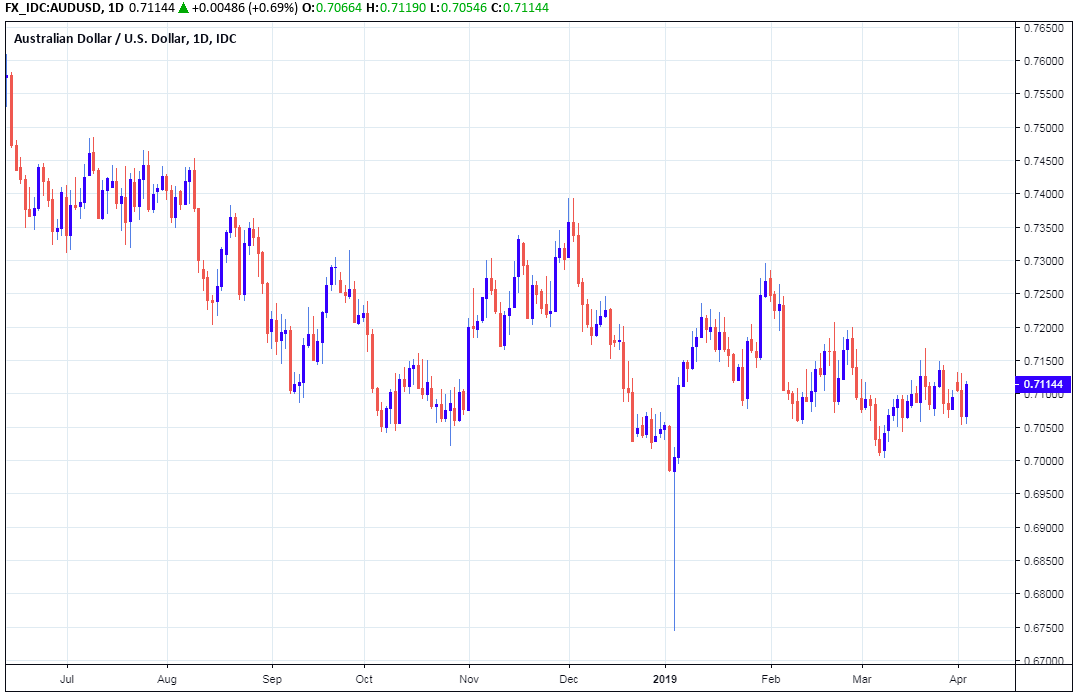 The Australian trade surplus rose to a fresh record high of $4.8 bn during February after exports grew by 0.2% and imports fell by -1.1%, generating a positive increase in the trade balance.

Australian exports have been boosted of late by rising iron ore price and liquefied natural gas trade volumes as well as prices. The iron ore price is now closing in on the $90 per tonne, its highest level since Jauary 2017.

"The bulk of this improvement likely reflects higher commodity prices. The lift in prices is boosting Australia's national income, which is flowing through to higher tax revenues - providing governments with additional fiscal flexibility, as evident in recent budget updates," says Andrew Hanlan, an economist at Westpac. 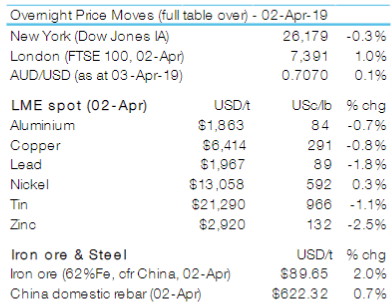 Trade balance data measures the difference in value between a nation's imports and its exports. Currency markets care about it because the data provides insight into supply and demand of a currency in the "real economy", while also giving a steer on the likely pace of GDP growth in a given period.

"Taken together, the monthly trade data suggests a positive contribution from net exports towards Q1 GDP," says Jack Chambers, an economist at ANZ.

The Australian Dollar was further buoyed overnight by the Caixin services PMI from China, which rose from 51.1 to 54.4 during March when markets had looked for an increase to only 52.3.

Chinese economic data has improved in recent weeks, which analysts attribute to government stimulus measures. A Chinese economy that is recovering from the trade war with the U.S. is good for the Aussie given that China is largest consumer of Australian resources. 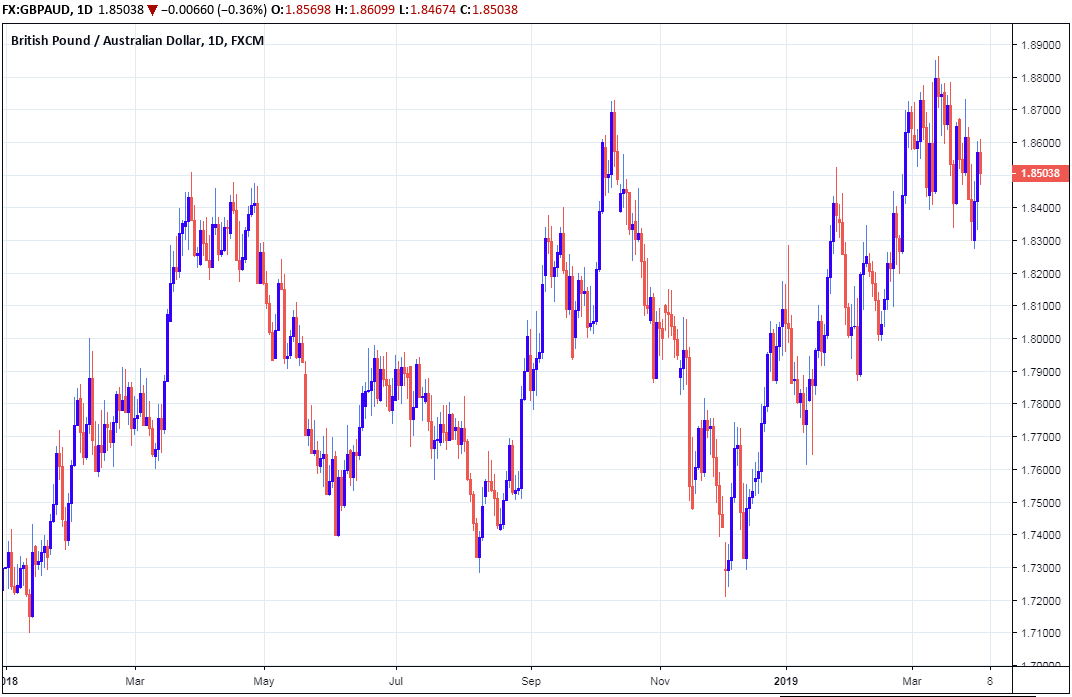 Reserve Bank of Australia Governor Philip Lowe said Tuesday the cash rate would remain at 1.5% in April. However, and despite making a volley of optimistic statements about the economy and outlook for growth, Lowe also hinted about a possible change of policy being on the horizon.

Lowe told markets the board would "continue to monitor developments and set monetary policy to support sustainable growth". That was an additional line tacked on to the end of the usual policy statement, and it's now caught the eye of analysts.

"Our economists interpreted changes to the final sentence in the statement as hinting at a possible move to an easing bias at the May meeting," says Adam Cole, chief FX strategist at RBC Capital Markets.

Given the Australian government's latest budget was still to come this Tuesday, and considering fiscal policy could impact the economic and inflation outlook, the RBA board may have decided to hold off on announcing any changes to its policy stance this month.

However, May will see the RBA publish its latest quarterly monetary policy report, which would be an opportune time for the bank to announce any changes to the way it views the interest rate outlook. Especially if the RBA sees measures announced in the budget as not being enough for the economy.

"The strong Australian economic data was in direct contrast to perceptions that the RBA had become slightly more dovish in Tuesday’s RBA meeting. As always, there is a risk of over‑analysing the changes to the RBA’s statement. We will receive more colour when the RBA minutes for the meeting are released on 16 April," says CBA's Grace. 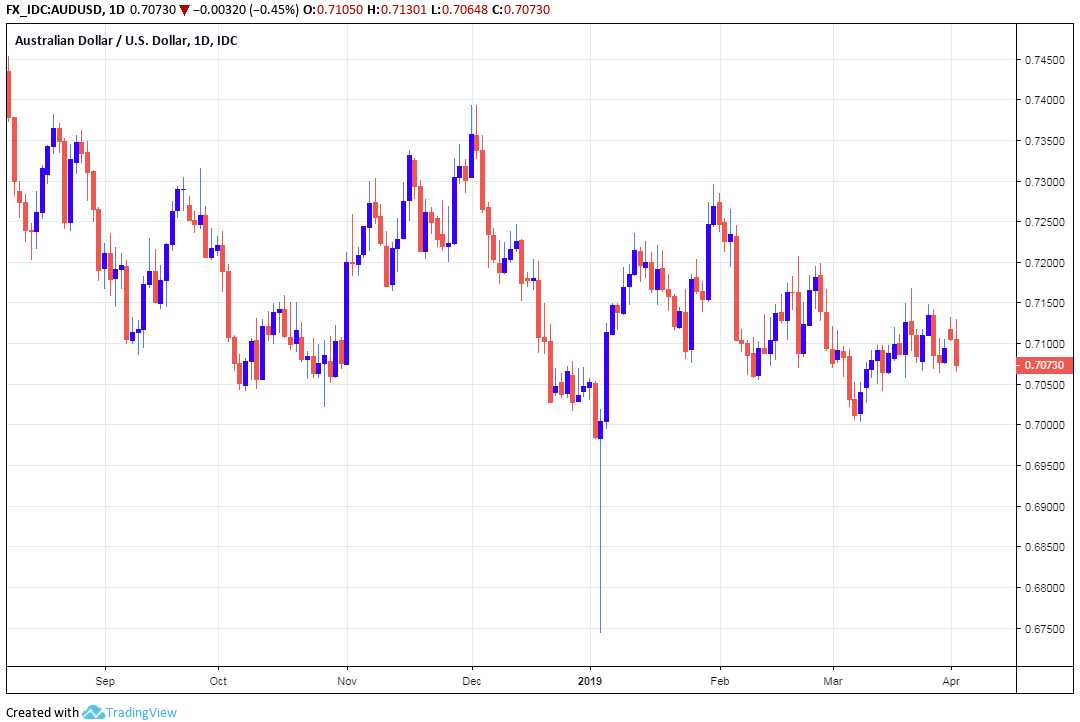 The RBA shifted to a so-called neutral bias in February when it said the next move in rates could be either up or down and that a sustained deterioration of the labour market would likely trigger a cut.

At the heart of both bank's policy pivots is a years-long period of below-target inflation that is currently being prolonged by faltering economic growth. Inflation is a function of demand, among other things, so when economic activity falls it's possible that consumer price pressures will to.

Changes in interest rates are normally only made in response to inflation but impact currencies through the push and pull influence they have on capital flows. Rising rates are positive for a currency and vice versa.

"The main domestic risk is to the consumer in an environment of high debt, weak income and falling house prices. Income tax cuts are the better choice for dealing with consumer risks," says Michael Blythe, chief economist at CBA. "An $8 bn tax cut would have double the impact on disposable income as a 25 bp rate cut."

The government announced changes to tax brackets that are expected to result in around a $3.5 bn increase in the total disposable income of the Australian workforce which, according to Blythe's estimate, could provide the same amount of support to the economy that a 25 basis point rate cut would.