The Pound-to-Australian-Dollar rate is set to beging trading around 1.8648 Sunday after falling more than one percent in the previous week, although studies of the charts suggest the outlook for the days ahead is a bullish one.

The GBP/AUD pair fell at the start of last week after it the government requested from Brussels only a very short delay to the Brexit process. It recovered later, however, after the EU left the door open to a much longer extension of the Article 50 negotiating window, and potentially an indefinite one if Prime Minister Theresa May fails again to get the EU Withdrawal Agreement through parliament.

Speculation over the future of Prime Minister Theresa May and government in the UK will also be an important driver of the Pound in the week ahead. 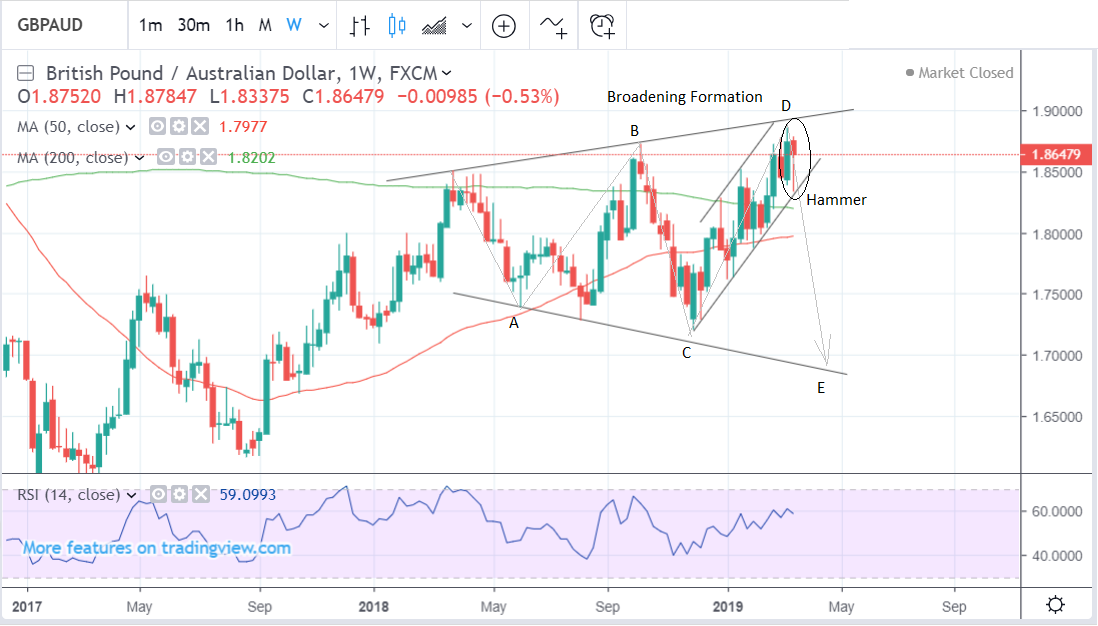 The technical outlook remains mixe given that charts suggest gains are likely in the short-term, but that the longer-term outlook is a challenging one. The pair is in an established short-term uptrend but is vulnerable to weakness due to the evolution of a ‘broadening formation’ or ‘loudspeaker’ patterns, which is a bearish indicator.

These patterns are usually composed of 5 waves, labeled A-E. So far only 4 waves have formed, suggesting a wave E down could be next to unfold. This move is far from confirmed since the pair remains in an intact uptrending channel and also formed a bullish hammer candlestick last week, which is evidence of a bullish short-term bias. 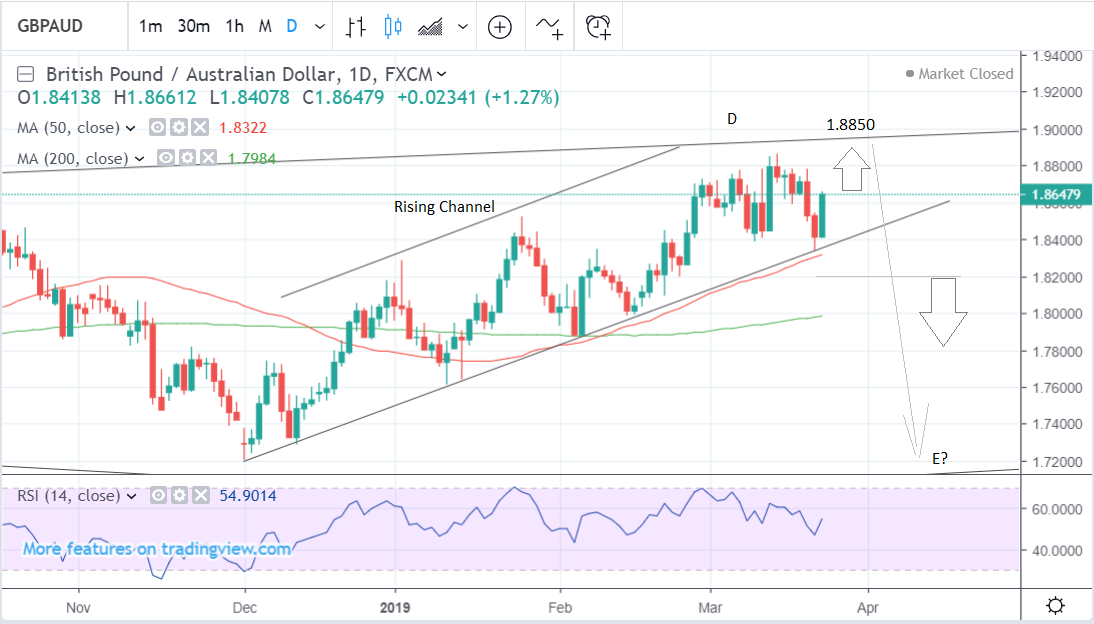 The intact rising channel has further to run, likely up to the upper boundary line of the broadening formation at 1.8850. However, at that level, the market would be vulnerable to declines and the start of a long move lower.

A break below the 1.8200 level would amount to confirmation of a new bear trend evolving, with a downside target around 1.74 threshold. A long-term trendline provides major support at about 1.7200 but if this is broken, losses could easily accelerate. 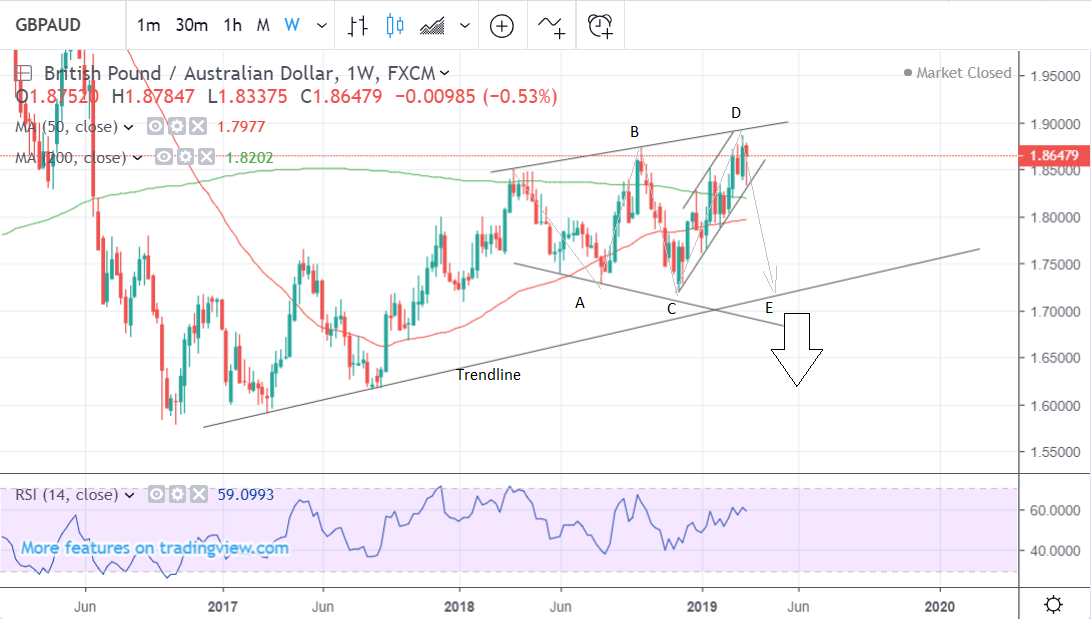 The  main event for the Australian Dollar in the week ahead is likely to be geopolitical in nature since the domestic data releases in the calendar are fairly low key.

U.S.-China trade talks are scheduled to kick off again on Thursday, 28 March. Any positive opening statements may support the Chinese Renmimbi and Australian Dollar although markets could soon begin to grow impatient with a lack of detail on the final shape of the trade deal.

President Donald Trump has tweeted that tariffs on Chinese imports will remain even after a deal is done, which is likely to cost the Chinese economy and could complicate the process of reaching a durable agreement.

Markets are hoping a deal will be done in the next few weeks so that Trump and President Xi Jingping can sign it off when they meet at the end of April. This outcome is already priced-in to financial markets so the risks for the Aussie, which is strongly correlated with the Renmimbi, are all one way. This means the Aussie might not have a lot left to gain from a deal being done, but that it could easily lose out if the talks start to fall apart.

“We still see a very high likelihood that a deal will be closed within the next three months, despite the rising hurdles at the end of the trade talks. Trump needs a deal to set the stage for his election campaign, where he will be able to present significant gifts to key voters in the agricultural heartland as well as strong support to stock markets and the economy,” says Allen Von Mehren, chief analyst at Danske Bank.

Equally as important for the Aussie are signs the Chinese economic downturn may be bottoming out. Danske notes that rising metal prices suggest a rebound in the domestic economy. Australia is a major exporter of iron ore to China so rising prices are positive for the Australian economy too.

Speeches from Reserve Bank of Australia (RBA) board members Ellis and Kent will also be scrutinised closely given the bank's current neutral interest rate stance and much speculation over the direction of policy through the rest of the year.

RBA assistant governor Luci Ellis will speak on Monday at 20:30 London time and Christopher Kent will speak at 23:00 on Wednesday. 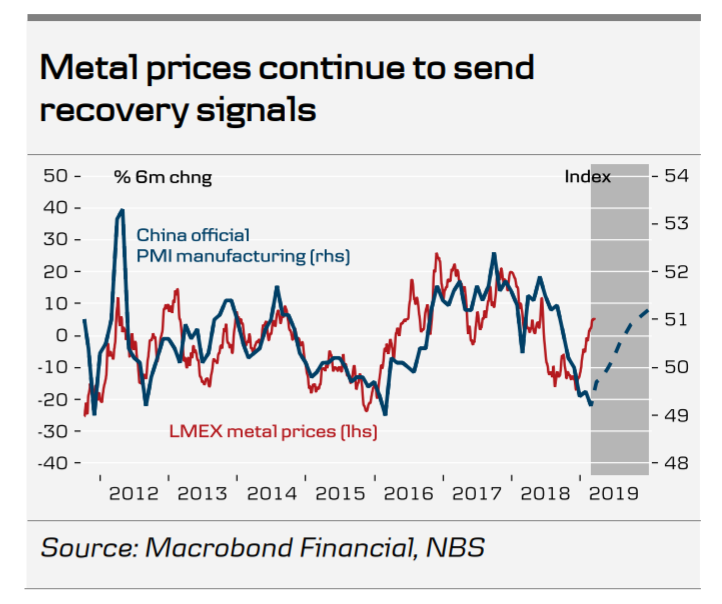